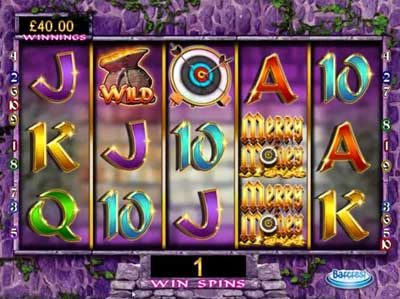 Merry Money is a slot game by leading UK software manufacturer Barcrest. Visually, this slot is exceptionally rewarding, featuring a theme that is based on Robin Hood. The backdrop pictures a dense forest, where the famous hero used to hide out. And above the reels is the game title in gold with a target and arrow sticking out in the bullseye. The symbols on the reels are just as interesting and mainly feature the lower value playing card symbols. They include A, K, Q, and 10, each in different colors and with an elegant golden frame. The highest paying symbol on the reels is the game logo, offering payouts of up to 250 times your stake. Merry Money also has several special symbols, including a bag of gold that is the game’s Wild.

The layout of the slot features 5 reels and 3 rows. There are 10 paylines in total and you cannot adjust them. Betting amounts range from 10p per spin up to a maximum of £500 per spin. The RTP is about 95%.

We already pointed out that this slot game has a Wild symbol and as such it can replace any of the regular symbols to help create winning combinations. In addition, it can appear in any position on the reels. The only two symbols that it cannot replace are the Robin Hood Bonus and Target Bonus symbols. 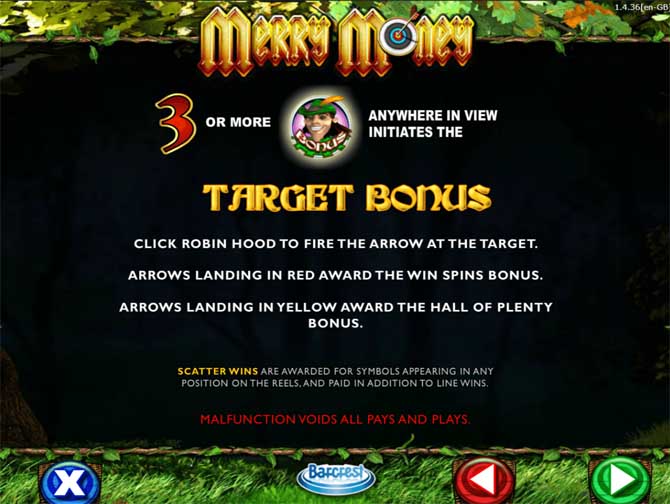 The former will activate the Target Bonus, if you manage to land three of the Robin Hood symbols simultaneously. This will trigger a game, in which you will need to help Robin Hood fire an arrow. Depending on where your arrow lands, you can receive either Win Spins or you can enter the Hall of Plenty bonus game. Before playing the Win Spins, you will first need to find out their number by playing the trail of win spins. During this game, you can win up to a whopping 100 freespins! 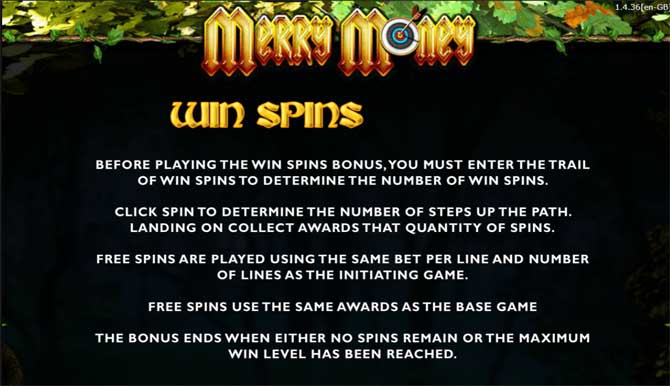 As for the Hall of Plenty, this will be a pick me game, where you will need to choose a door. Here you will be able to collect cash prizes, until the sheriff wakes up and ends the feature. And last but not least is the target bonus symbol. You will be looking to land three of it on the reels, which will trigger the Pick Me Bonus feature. The goal will be to simply pick out one of the targets, which will reward you with a certain cash prize.

Merry Money is a surprisingly entertaining slot game. Though it lacks the traditional Barcrest Big Bet feature, the developers have certainly done a great job in making up for it. The interactive and elaborate bonus features are what make the game and they are sure to entertain. Not to mention all the lucrative prizes you can win.