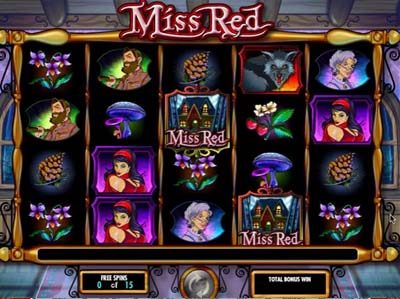 This slot game from IGT tells the tale of Little Red Riding Hood, although it does it in a more grown up version. The original story tells of a young girl who lives with her grandmother, although this game presents the titular character as more of a teenager who has dressed herself up for a night out on the town. However, the theme behind the game is still there. In addition to the title character appearing on the reels, there’s an icon of both the wolf and the grandmother, as well as the huntsman who comes and rescues the two of them from the big bad wolf. Further symbols include various flora and fauna, including mushrooms, squirrels, rabbits, lilacs and conifers.

The product takes place on a five reel and four row layout, and it includes a total of 1024 ways to win with its MultiWay Xtra feature activated. These ways to win cannot be customised as they’re fixed in place, you can however switch around the value of the coins, which starts from a minimum level of £0,1 and increases up to £5. Should this be at its highest level, you’ll be able to place a maximum overall wager of £225 per spin.

The MultiWay Xtra win feature, which is included in the game, will pay for the same symbol appearing in an position in neighboring columns. The same symbol in the same column will multiply your win.

The icon of the house is this game’s bonus symbol, and this appears only on reels two, three and four. Should three bonus icons show up in any position, you’ll trigger ‘Granny’s Freespins Bonus’ round. You’ll need to choose a basket to earn between five and eight initial freespins.

This product offers players a wonderfully themed product, complete with many special features and additions.