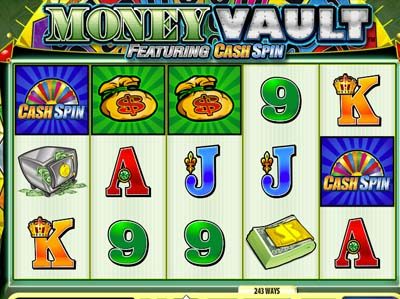 Wouldn’t it be nice to be in possession of a money vault? And wouldn’t it be nice to have some actual money to go inside it? Well, thanks to Bally Technologies, you’re able to take a peek into what it would be like by playing their slot game, Money Vault. Originally a land-based product, Bally have since turned it into an online game as well, opening it up to many more players. The product includes imagery of everything you’d expect to find stowed away inside a vault, including the obvious gold coins, through to diamond rings, wads of paper money, and there’s even an icon of a safe that’s so full it’s almost exploding!

The game has five separate reels and three rows, and Bally has also included a total of 243 ways to win. Wagers can be altered per spin by changing the ‘Credit Value’ up or down from £0.01 to its maximum of £16. Meanwhile, the game automatically incorporates 40 credits into each round, so your credit value will be multiplied by this, giving players a maximum overall wager of £640.

Money Vault includes a wild symbol, which will appear only on reels two and four. This icon will substitute for all others on the reels, except bonus and scatter symbols.

The ‘Cash Spin’ bonus icon will appear on reels one, three and five, and should you manage to spin one on each of these reels, you’ll trigger the ‘Cash Spin Wheel’ bonus round. One spin of the wheel is awarded to you, and this will reward you with instant wins or freespins. Should you manage to claim the freespins, this will provide you with a total of 12, where all payouts are doubled.

The money bag icon acts as the game’s scatter symbol, appearing on reels two, three and four. Should three of these appear anywhere on the mentioned reels, the ‘Money Bag’ bonus feature will be activated. This requires you to pick one of three money bags, revealing a credit value that is added to your winnings.

Money Vault offers up an interesting game with multiple added features to keep you thoroughly entertained.