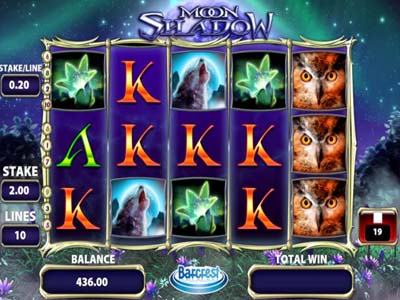 Moon Shadow invokes a sense of mystery and wonder, at least from its incorporated soundtrack. Furthermore, its reels are filled with icons of wondrous nature, including a howling wolf and a vibrant, green flower. You’ll instantly get the relativity to its name, Moon Shadow, with the game giving the atmosphere of a moonlit night, with starry skies and wide open, green fields.

The game has five separate reels, as well as three rows worth of an interface. There are 10 paylines included alongside this, and the bet per payline can be altered between the minimum of £0.01 and the maximum of £50. This allows players to place a maximum overall wager of £500 per spin. Alternatively, players can activate the big bet game in order to make all 20 paylines active for a better return to player.

There’s a vibrant red wild symbol included in the game, which will substitute any other symbol on the reels in order to create a winning combination. The only exception to this is the icon of the Moon Girl.

Moon Shadow by Barcrest is an intriguing game at first glance, filled with vibrant music and icons, as well as generally pleasant gameplay. There isn’t an abundance of extras included in the product, with the wild symbol and freespins being the only incorporated features. However, it will provide several hours of interesting gameplay.