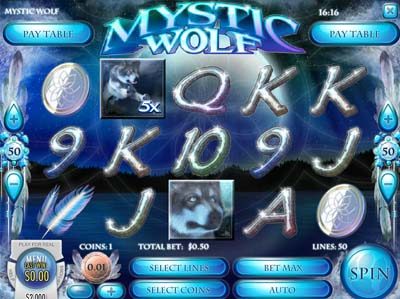 Mystic Wolf opens up with a beautifully crafted video package, giving you imagery of a wolf on a long journey. The game itself takes on an almost native American feel, with feathers, amulets and full moons filling up the reels as symbols. In addition, a very calming piece of music plays along as you spin the reels. Extra symbols include various different wolf poses, and the sound of a calm breeze plays as you set the reels off in motion. Each of the symbols is wonderfully animated, providing compelling gameplay.

The layout features five reels and three rows, while a total of 50 separate paylines have been included alongside. These can be decreased and increased in sets of five. The coin value is able to be changed between £0.01 and £0.25 per active payline, while the amount of coins played can be changed between one and 10. This allows all players the chance to place a maximum overall bet of £125 per spin.

The sparkling gemstone provides a big payout in this game, and should you spin five of these on an active payline, you’ll be rewarded with 5,000 coins.

The symbol of the mystic wolf running acts as the wild symbol, replacing all other symbols to form a winning combination when possible. This also multiplies the payout by five.

The Mystic Wolf Super Round is activated by three or more feather icons appearing on the reels in scattered positions. Three of these provide seven freespins, four provide 15 freespins, and five reward you with 50 freespins.

Finally, the Lunar Phase Bonus Round, which can only be activated in the  Mystic Wolf Super feature, is activated when three or more geometrical shapes icons are appear anywhere on the reels.

Mystic Wolf from Rival offers up what appears to be a simple game on first glance, but provides much more than that when it comes down to playing it, including interesting extras and unique animations.