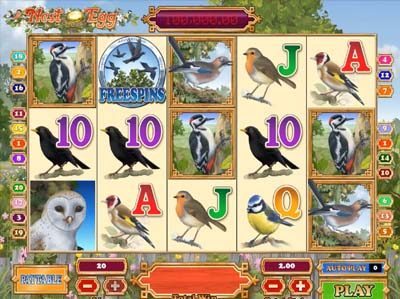 Animals play quite a bit part in many online video slots, although birds aren’t so frequently touched upon as much as say big cats or African plains mammals. However, Ash Gaming have created their game ‘Next Egg’ with the idea of rectifying that. As such, you’ll find that the product has various different bird icons in view on its reels. These include the noisy woodpecker, the wise barn owl, the humble blackbird, the seasonal robin, the colourful blue tit, the collared dove, and the remaining two being the goldfinch and the jay. These are also accompanied by an icon of a golden egg, which brings its own special features to the game.

As far as its layout goes, Nest Egg offers up a standard five reel and three row interface, which has also had a total of 20 separate pay lines included in it. These can be switched around, in case you prefer gambling on less. Players also have the chance to change their stake played per round as well. This is done by using the plus and minus buttons below the ‘Total Stake’ section, and this has a range of between £0.01 and £200 per spin. An ‘Autoplay’ section is also included, which allows you the chance to play several consecutive spins at the same wager level.

There’s a wild symbol in the game, which is represented by the circling birds, and this will substitute for any other icon on the reels, except for the freespins, bonus and golden egg icons.

And speaking of the freespins round, this is triggered when you land the relative scattered icon on reels two, four and five. A total of eight freespins will be awarded to you, and during this feature an extra symbol is added to the reels, which is a view of the blue sky, which is a stacked symbol. When it appears on a spin, all of them transform into one of the bird icons.

The bonus icon is represented by a set of binoculars, and if you land this on reels one, three and five, you’ll trigger the ‘Bird Spotting’ bonus round. Here, you’ll be taken to a garden scenario where musical notes drift up from the undergrowth. Click on one of the notes and you will spot a bird which will start to sing. The longer he sings, the more money you win.

The only other extra feature is where the golden egg comes in to play. This relates to the progressive jackpot, which can be seen above the reels. There are two ways of winning it. The first is by landing five of the eggs on an active pay line during the main game or freespins. The second is by spotting three golden eggs during the bonus round.

This provides gamers, especially those with a keen interest in birds, with a great and entertaining game to play, thanks to its super graphics and special features.