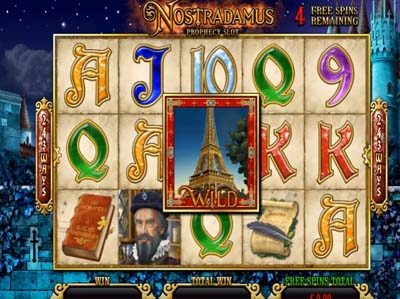 Michel de Nostredame, usually Latinised as Nostradamusm, famous book Les Propheties, is the basis of the Nostradamus slot game, created by Ash Gaming. The reels of this game are filled with icons of various different seer imagery, including a telescope, a scroll with quill, the aforementioned book written by the title person, an hourglass, and of course, Nostradamus himself. These have all been joined by the regular A, J, Q, K, 9 and 10 icons.

The interface of the game is made up of five reels and three rows, presenting a regular enough image. In addition to this, the developer has added 243 different ways to win, none of which are able to be customised in any way. In addition to this, the bet you play per spin is able to be changed between the minimum of £0.25 and the maximum of £125. This is altered by the plus and minus buttons shown in the ‘Stake’ section.

The game has a couple of different bonus features, which starts with its Planets Bonus round. The symbol for this, which is that of the planets, appears on reels one, three and five only, but if they appear on these reels at the same time, the round is activated. The screen will then display the planets circling around the sun at different speeds. The movement will halt with one or more of the planets on a win line and each will add to a total multiplier prize.

The modifiers rest in the area of Earthquake (following each spin, a random number of symbols will disappear to be replaced by ‘enhanced’ ones), Lightning (a lightning bolt will turn up to four symbols wilds) and/or Tsunami (between one and three reels will become completely wild).

There’s also the addition of Nostradamus’ Predictions, whereby a scroll may occasionally unfurl to reward you with extras. And finally, if you’re playing at maximum stakes, there’s the ‘Prophecy Book Bonus’. Every time you land a win, the book symbols will also receive an additional cash prize.

This game presents players with a great product that is crammed full of additional features.