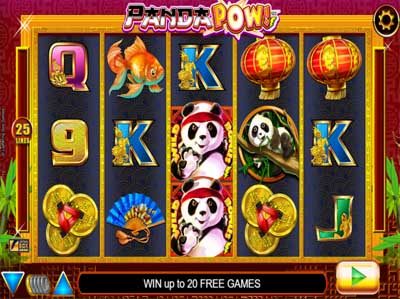 Panda Pow is a Chinese themed online slot game by software developer Lightning Box. As you can tell from the title, the main focus of this game is on pandas. There are a few of them here, as you will see during gameplay. There’s a very peaceful and tranquil traditional Chinese soundtrack in the background. However, you can always mute it if you would prefer to spin the reels in silence. As for the backdrop, it’s a deep maroon merging into purple. You can make out the leaves of bamboo trees on either side of the reels – the panda’s favorite food. There’s a golden frame hugging the reels with some fine characteristic Asian patterns lining it. So as far as the design goes, the developers have pretty much stayed true to the traditional color scheme for slots in this genre. 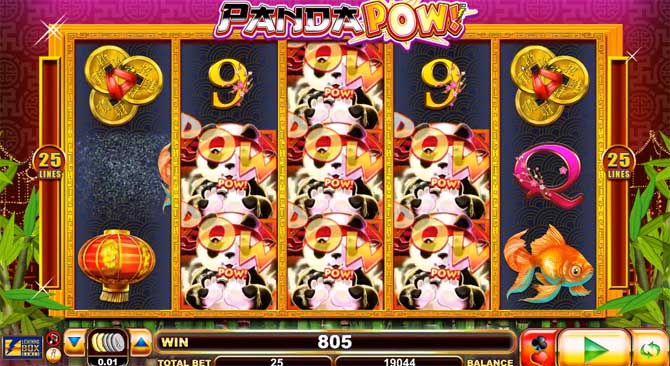 Now, let’s move on to what you will actually be seeing on the reels. First of all, you will notice the golden framed lower value playing card symbols. They all have a very neat design and each comes in its own color. They include the simpler looking 9 and 10. And the somewhat more advanced Jack, Queen and King symbols each have some golden ornaments on them, as well. Following these, there’s a handheld fan and a traditional red paper lantern. Then there’s a set of three gold coins with a red ribbon running through them. Last but not least is a goldfish and the star of the show – the panda. As for the layout, things are pretty traditional here, as well. There are 5 reels and 3 rows with a total of 25 paylines. The paylines are fixed, so you won’t have the opportunity to adjust them. But you will be able to enjoy an incredibly wide betting range from 25p per spin up to £1,000 per spin! The RTP here is set at 95.51%.

Aside from the regular panda symbol – the one you see mindlessly chewing on bamboo – this game also has a couple of other panda symbols. And these ones mean business. First in line is the Wild panda symbol that also doubles as a Scatter. It can only appear on the middle three reels: 2, 3 and 4. As it’s a Wild, it will be able to replace any of the other symbols to help create winning combos. There’s only one symbol that it cannot substitute for and that’s the Gold Panda symbol, but we’ll explain more about that in just a bit. 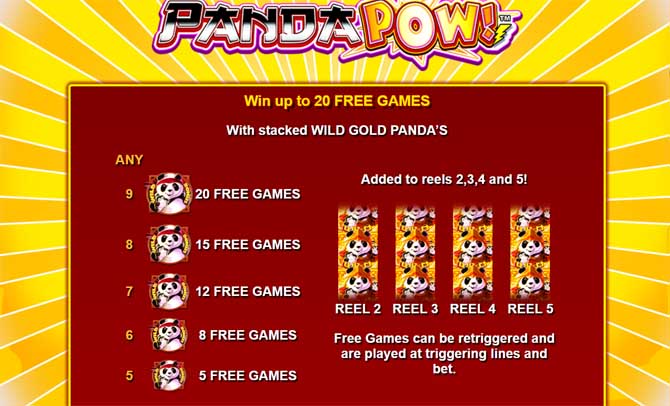 For now, let’s not forget that the Wild panda also fulfills the purposes of a Scatter symbol. And as such, it will also be able to trigger the freespins bonus feature this game has in store. Better yet, the Wild Scatter can also appear in stacks of up to 3 symbols, so you will have a wide range of different possibilities of triggering the freespins round. The minimum number of Scatters you will need to land is 5. This will award you 5 freespins. 6, 7 or 8 Scatters will award you 8, 12 and 15 freespins, respectively. Then, last but not least, the maximum of 9 Scatter symbols will award you a total of 20 freespins. During this freespins round, you will be able to benefit from a new symbol – the Gold Panda. It will act as a second Wild and will be able to substitute for all other symbols, but the other Wild.

What’s more, the Gold Panda will also be able to land anywhere on reels 2, 3, 4 and 5. And just like the regular Wild and Scatter symbol, the Gold Panda Wild will also be able to appear in stacks of up to 3 symbols on a reel. And we are still not done yet. This freespins bonus round will also allow you the opportunity to retrigger it. You will again need to land at least 5 or more of the Wild Scatter symbols simultaneously during the same spin. So, potentially you can gain a maximum of up to 40 freespins during the same round! However, this is as far as the bonus and special features go in Panda Pow. And while perhaps there’s no real abundance of bonus features, we do thing the developers have made the most out of it. That is especially true thanks to the Wild, doubling as a Scatter, and the extra Wild that you can benefit from during the freespins round.

Panda Pow isn’t the most innovative and unique slot game on the market, that much is certain. However, the freespins feature can certainly make it worth your while. The additional Wild symbol will surely make for higher wins and things can get pretty exciting during this round. In addition, it doesn’t hurt that the graphics and soundtrack are pretty nice as well.