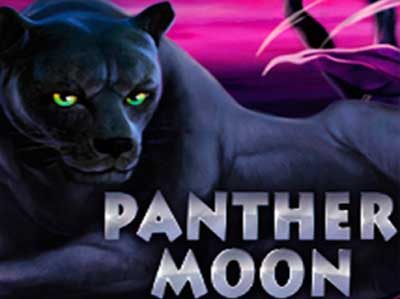 Panther Moon is a ‘wild’ online slot game by software developer Playtech. It takes you deep into the jungle, only unlike in most jungle themed titles, it shows you a different side of it. Here, instead of showing that bright, colorful side of the jungle, the developers have decided to bring about the jungle at night. With a predominantly purple color scheme, the jungle suddenly develops a rather menacing appearance. You can make out some of the vegetation in the backdrop against the dark sky. But most of the focus in this offering is on all those jungle animals that come out after the sun has set. Coyotes, owls and moths of gigantic proportions – but more on that in just a little bit. You will notice that Panther Moon isn’t the latest release out there, so there’s nothing all too special about the visuals. And there’s no real soundtrack in this game either. 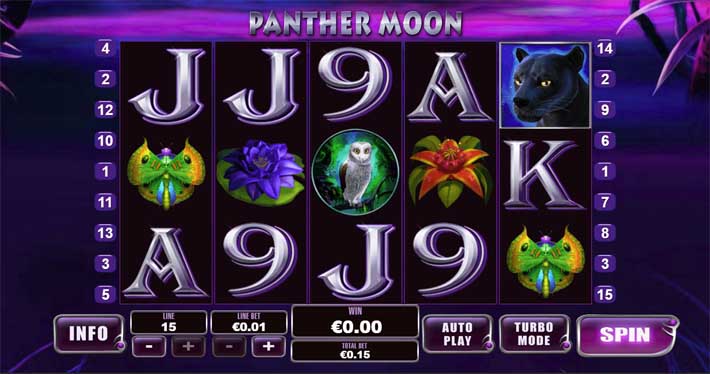 As for the symbols, they start off with your typical lower value playing card icons. All of them have a rather subdued design and come in the same shades of silver and purple. The symbols we have here are A, K, Q, J, 10 and 9. Next up we have the different inhabitants of the jungle we mentioned earlier as the higher value icons. These include two exquisite flowers – one blue and the other red. Next is the very large, colorful moth, after which we have two predatory species. One of them is the owl, and the other – the coyote symbol. Both of these can grant you rewards of up to 750 coins each. The layout in Panther Moon is not different from the majority of slot games out there. It has your standard grid of 5 reels and 3 rows. And the total number of available paylines is 15, but these are not fixed. So, if you choose to, you can adjust their number to your liking. Nevertheless, stakes here are rather expensive. They start at a minimum of 15p per spin, and that’s if you’re playing on one payline. And the maximum available wager amount on these reels is £15 per spin. The average long term RTP in Panther Moon is 95.17%.

The black panther symbol acts as the game’s Wild. And on top of that, it is also the highest paying icon on these reels, with payouts reaching up to a whopping 10,000 coins! The wild can substitute for any of the regular symbols on these reels. Thus, it can contribute to completing winning combinations of other icons. And in addition, it will also be able to double the prizes for any winning combination it contributes to. However, there is one symbol that the Wild cannot replace and that is the game’s Scatter.

In turn, the Scatter symbol comes in the form of a full moon shining over the waters of a river – or maybe the ocean. Just like the Wild symbol, the Scatter will be able to appear in any position, on any of the five reels. And though it’s also quite lucrative itself, that is not its main attraction. The Scatter symbol has the capacity to trigger this titles single special feature – the freespins bonus round. All you have to do in order to activate the bonus is land a minimum of 3 Scatters in any position on the screen, during the same spin. 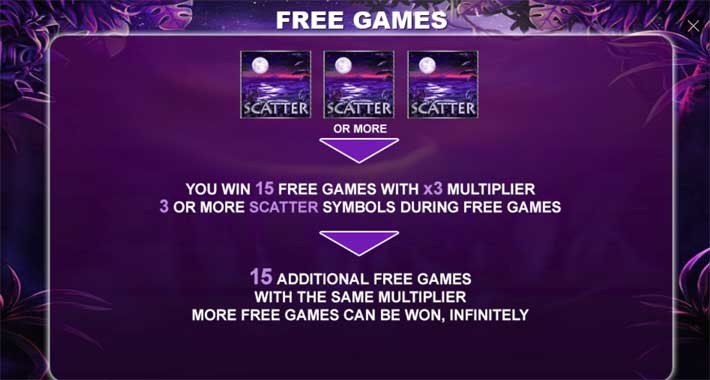 This will award you a total of 15 freespins. Furthermore, the freespins come with a 3x multiplier on all winnings. And as if that weren’t enough, you will also have the opportunity to re-trigger this feature an infinite number of times! To do this, you will again need to land 3, 4 of 5 Scatter symbols at the same time. Each re-trigger will also offer you an extra 15 freespins on top of the ones you have left.

And last but not least, let’s not forget that Panther Moon comes with its own Gamble feature, as well. It will give you the opportunity to gamble your prize after any winning spin, at any point during gameplay. Thus, if you feel you want more possibilities to win, you can take advantage of the simple side game on offer. The objective of the game is to simply pick out a higher value card than that of the dealer. If you win – you double your amount. If you lose, though, you will lose the whole amount. There’s also a cap on the wins of £5,000.

We’ve already made it quite clear that this isn’t the latest offering on the market. It’s also not the most diverse and doesn’t dazzle with an abundance of features or an interactive theme. However, Panther Moon does provide a rather enjoyable gaming experience anyway. You have the Wild and its multiplier, as well as the freespins that come with an even bigger multiplier. We think the unlimited re-trigger potential is also quite generous.