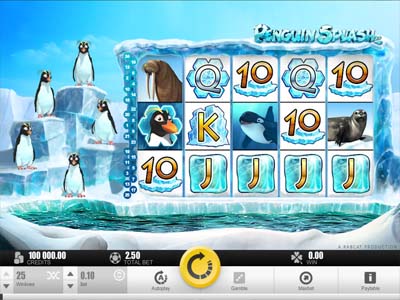 It’s time to take a trip to the Arctic with Penguin Splash, a product that will see your reel spinning overlooked by five animated penguins. The reels themselves are filled with all the relative symbols, including Arctic animals like the walrus, killer whale, seal and polar bear, as well as ice-covered J, K, Q and 10 icons. And with every winning combination that you spin, one or more of the watching penguins will support your victory with a dance or a clap of their wings.

The slot game is made up of a five reel and three row layout, and has a total of 25 customisable paylines included alongside. Players are able to alter the coin value of the game from the minimum of £0.01 up to the maximum of £2.00 per line, offering up a maximum overall wager of £50 across all 25 lines. An autoplay button is also able to be used to set the reels off spinning for a maximum of 25 consecutive times.

The wild symbol of this game is represented by the arctic fish. This replaces any other symbol and completes a winning combination on the reels, with the exception being the freespin scatter symbol.

And speaking of the freespin scatter symbol, this is represented by a penguin. Spin three or more of these anywhere on the reels and you’ll be rewarded with up to 25 freespins. If two penguins remain on the ice floe during this round, all wins will be doubled.

Penguin Splash may not have the abundance of added features that many of Rabcat’s other games do, but it definitely makes up for any lack with the genius animation incorporated. The game is a lot of fun and provides endless hours of entertainment.