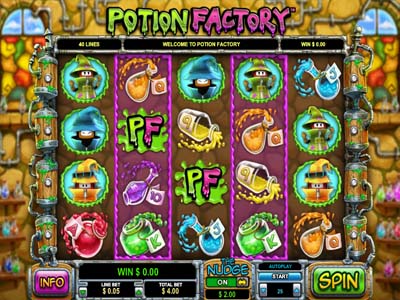 Potion Factory is everything you’d expect it to be…a game based on the creation of various different potions, complete with a zany soundtrack that reeks of mystery and intrigue. Each of the standard A, J, K, Q, 9 and 10 symbols on the reels have been adapted into various different sized, shaped and coloured bottles of potions – all of which appear to be in some state of escaping their glass cages. Making up the rest of the symbols are what appear to be wizards of some sort, all of which are dressed in their own coloured robes.

You’ll be given a five reel, four row game layout to spin, and a total of 40 fixed paylines to wager on. Speaking of which, the wager can be changed by altering the coin value between the minimum of £0.01 per line and £0.25 per line. Therefore, a maximum wager of £10 per spin is able to be placed, or, if you also include the ‘Nudge’ feature, you’ll add an extra £10 to that amount, presenting you with a maximum overall wager of £20 per round.

Potion Factory’s wild symbol is a glass bottle filled with a multi-coloured liquid, and this will act not only as a wild, substituting for other symbols to make a winning combination, but also as an expanding wild that replace all other symbols on the reel. The bonus symbol is the only exception to the substitutes.

The bonus symbol is what appears to be a potion mixing capsule – which also appears to be spilling its contents everywhere. Should you spin three of these on reels one, three and five in any position, you’ll trigger the ‘Multigame or Multilevel’ bonus intro. This requires you to spin a wheel, which will either send you to ‘The X Formula’ bonus round, the freespins round, or present you with an instant win.

Finally, ‘The X Formula’ bonus round requires you to select from multiple bottles of ingredients to complete the ‘X’ formula.

Potion Factory offers up a great game with a multitude of extras included, as well as visually pleasing graphics and the aforementioned crazy soundtrack to keep you entertained.