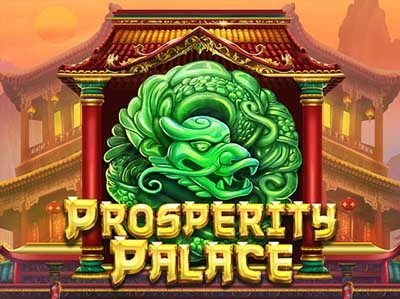 Prosperity Palace is an online slot game by slots developer Play’n GO. It has a very traditional Asian theme, with the classic red and gold color scheme and the imagery you see will definitely be familiar from pretty much all other Asian themed online slot games out there. With that in mind, though, the presentation is pretty impeccable. You can enjoy great quality graphics and neat animated features. Besides that, there’s also a very pleasant, authentic backing track to accompany gameplay. The reels are housed by a traditional Chinese building, with a decorated red roof and two lovely red columns on either side of the reels. There are golden dragons whirling around them, as well as fumes of blue smoke. And on either side of the screen, there’s a golden guardian lion standing watch. And every now and then you can also see pink cherry blossoms bloating down past the reels. 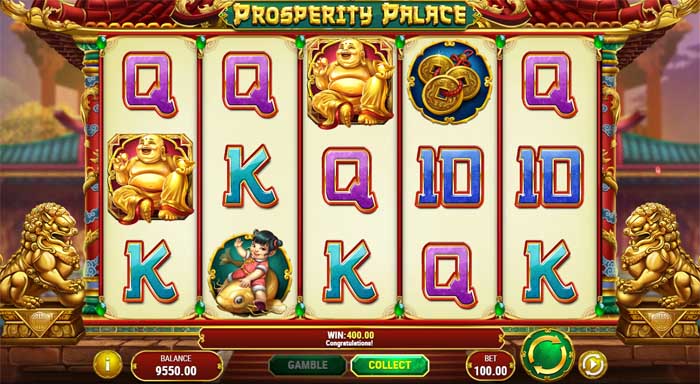 The symbols in this title certainly aren’t all too original, and start off with the playing cards. These each come in a different color with a fine, polished finish. And they include the symbols A, K, Q, J and 10. Next are the higher value symbols, of which there are only three icons in total. The first of them is the bundle of gold coins, with some red string binding them together. After that there’s a pretty tangible increase in value for a symbol depicting a little boy riding a giant orange koi fish. And last but not least, with an even bigger bump in payouts, is the symbol depicting a little girl atop a giant golden koi. This brings us to the game’s layout, which features your common slot machine layout of 5 reels and 3 rows. The total number of available paylines in this slot is 10, and these are not subject to any adjusting. Stakes, on the other hand, enjoy a rather flexible range. The minimum betting amount here is 10p per single spin. And the largest possible wager amount will set you back a total of £100 per spin. The RTP in Prosperity Palace is also pretty decent at an long term average of 96.25%.

The amazing green dragon symbol represents the game’s Wild. Like some of the other symbols on these reels, it will also entertain players with some neat animated sequences every now and then. You can expect to see it in any position, on any of the five reels. And on top of that, this also happens to be the most lucrative symbol on these reels. With its help, you can potentially pocket up to 500 times your total stake. But most importantly, the Wild symbol will be able to substitute for any of the other symbols in this slot. In doing so, it will also enable players to land better winning combinations and even boost their overall winnings. However, there is just one symbol that the Wild will not be able to replace and that is the Scatter.

The Scatter symbol, in turn, comes in the form of a golden laughing Buddha statue. Unlike the Wild, though, the Buddha Scatter doesn’t offer any payouts of its own. In addition to that, it doesn’t just land anywhere on the screen either. It can only appear on reels 1, 3 and 5. And in order for you to benefit from it, all three Buddha Scatters have to land during a spin. As a result, you will receive 10 freespins on a brand new set of reels. And on top of that, the Scatter will also act as a Wild symbol all throughout the duration of the feature. Better yet, you can also retrigger the freespins bonus round. This you can do the same way you triggered the freespins initially: by landing all 3 Buddha Scatters at the same time. This will award you an additional 10 freespins.

Furthermore, Prosperity Palace also boasts its very own Gamble feature. It will give you the choice of collecting or gambling your winnings after a successful spin. By opting for the latter, you will access a simple side game. The objective of it is to guess the correct color of a playing card to double your amount. Or you can also try to guess the suit of the card and thus quadruple your amount.

Prosperity Palace is a very pleasant offering by Play N Go, with really high quality graphics and a tasteful design. It’s also a very simplistic slot game, with just one special feature and the Gamble feature on the side. The setup and layout are all pretty basic, and that’s absolutely fine. This is also a low variance online slot, meaning you can enjoy frequent wins coming in throughout gameplay. However, the size of the wins will mainly be pretty small.