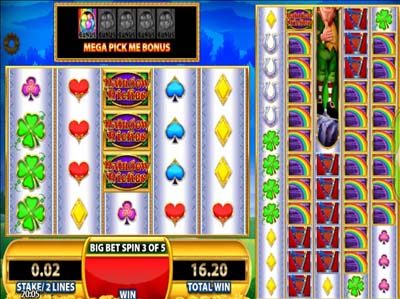 Rainbow Riches Reels of Gold is a slot game by software provider Barcrest. It offers a whole bunch of color and detail on its reels. Players will surely notice the unconventional layout of the game right away. But the second thing to capture your attention will probably be the multitude of colors and the overall rainbow feel. The symbols picture various good luck charms, such as the 4-leaf clover, a silver horseshoe, a harp and rainbows. Lots of rainbows. There’s a couple of red cap mushrooms here, too, in addition to the lower level playing card suit symbols.

The layout, as we mentioned, isn’t quite traditional. It features a regular set of 5 reels and 4 rows on the one hand. On the other – it has a set of Colossal Reels with 5 reels and 12 rows. There are a total of 100 paylines and a stake range that’s optimal for both penny players and high rollers. You can bet anywhere from 10p per spin up to £500 per spin. The RTP depends on stakes and can be 94%, 96% or 98%.

Rainbow Riches Reels of Gold offers a variety of special features. First up is the Stacked Rainbow Riches symbol. If it appears anywhere on the main set of reels, it will automatically transfer to that same reel on the Colossal Reels set. You can even get more than one reel at a time, which can then make for some massive wins.

But there’s much, much more. Your best friend here would be the Purple Fairy. She can appear on the reels at any point, completely randomly, and award you one of 7 extra features. First is the Magic Wilds bonus feature, which will make blocks of Wilds appear on both sets of reels. These blocks will move up and down and then stop to create winning combos. Another feature is the Wild Burst Bonus, which will see fairies fly up to random positions on the reels. The symbols they land on will turn into Wilds. Next is the Magic Symbols bonus feature, which will turn playing card symbols into wishing wells. The wishing wells will subsequently change to reveal all of the same symbol.

The Purple Fairy can also award you a multiplier of 2x, 3x or 5x for a spin. A further bonus feature, called the Super Wild Stacks, will make expanding Wilds appear on the main set of reels and then transfer to the Colossal Reels. In addition to all of this, this game also has a freespins feature. To activate it, you will be looking to land 3 or more Scatter symbols, which will initiate a Pick Me game. As a result, you will receive a multiplier of up to 200x and the possibility to pick from 3 to 6 balloons to reveal the number of freespins.

Rainbow Riches Reels of Gold certainly offers plenty of entertainment. If you aren’t a fan of brightly (perhaps childishly, even) colored games, don’t be too quick to pass on this one – it has some pretty lucrative prizes in store.