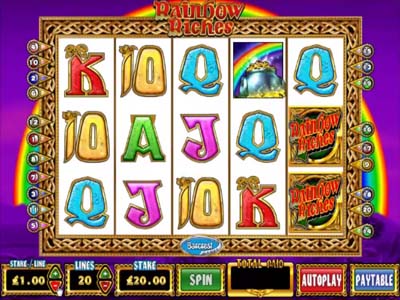 You’d better hope that the luck of the Irish is with you when you play Rainbow Riches! Featuring a jolly leprechaun as its mascot, as well as several other nods to traditional Irish folklore, Rainbow Riches provides a quirky and overall intriguing game to play. There’s even a symbol with a pot of gold situated at the end of a rainbow! However, don’t expect exceptionally appealing graphics or animations as those that can be found in products from other providers like Netent or Betsoft, for example, as this game doesn’t really have them.

It does provide a five reel, three row layout, and players can choose to have up to 20 paylines active per spin. The bet per line can be changed between the minimum of £0.01 and the maximum of £20, therefore offering a total overall bet of £400 per round to players. An autoplay feature is also included.

The wild symbol is represented by a gold coin featuring the aforementioned leprechaun , and this will stand in for all other symbols on the reels, except the wishing well, pot of gold, and road to riches icons.

There are three separate scatter icons included in the game as well, those being the three that the wild symbol doesn’t substitute. Three or more of each of these appearing anywhere on the reels will trigger their respective bonus round.

The Road to Riches scatter symbol will first require you to spin a wheel in order to decide the number of steps up the cash path you will be awarded. The wheel stops on either 1, 2, 3, 4, 5, 6 or COLLECT. You’re able to continue spinning the wheel until it lands on the collect position.

The Wishing Well feature requires you to select a well, and you’ll be awarded the value that is indicated on that selected well, multiplied by the total bet.

Finally, the Pots of Gold feature will send gold, silver and bronze pots of gold spinning around the screen. When they come to a stop, the arrow will point to one pot. The value of that selected pot is multiplied by the total bet.

The Rainbow Riches slot from Barcrest may lack in the graphics and visual appearance department, but the abundance of extras more than makes up for this.