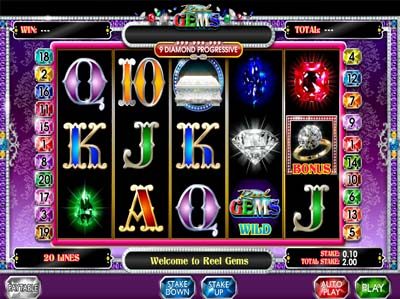 If there was ever a more simply laid out game, we’re not sure what it is, as Reel Gems seems to take the top spot for that. It has a very basic theme and its theme is well enough integrated into its reels, thanks to developer Ash Gaming. Of course, the main topic of this game is gemstones. These are added to the reels in a variety of colours and shapes. The first of these is the red ruby, there’s also a blue sapphire, a green emerald and a pure white diamond. These symbols have all been added alongside the standard A, J, K, Q and 10 symbols.

As well as its visual imagery, Reel Gems provides players with a fairly standard video slot layout of five reels and three rows. This is accompanied by a total of 20 separate pay lines, although these cannot be altered as they’re fixed in place. The only customisation you have control over is the amount that you wager per spin, which is changed via the ‘Stake Down’ and ‘Stake Up’ buttons at the bottom of the reels. This starts from its minimum of £0.05 and increases up to £10 per line, thereby offering up a maximum overall wager of £200 per spin.

Finally, the game also includes a wild icon, which is the game’s logo. This will substitute for any other symbol on the reels, except bonuses and scatters.

This game provides players with a great product to play, with extra features including a progressive jackpot.