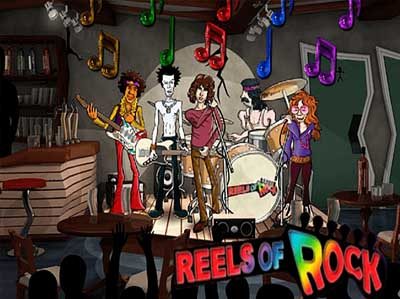 Are you ready to rock? Because this slot game by game provider Genii is just the thing for true music fans. Reels of Rock takes players in front of an open air stage for the show of a lifetime. All of the most iconic rock stars of the 1960s have been assembled here for a great performance. The symbols here have a distinct cartoonish feel, which is further enhanced by rainbow colors and typical 60s imagery. Some of the symbols also depict various concert attributes, such as backstage passes, microphones, guitars, drums, t-shirts and even a tour bus. But aside from them, you will also get to see representations of legends like Jim Morrison and Janis Joplin. But aside from the rock icons, you will also get to have some awesome music accompany your gameplay. 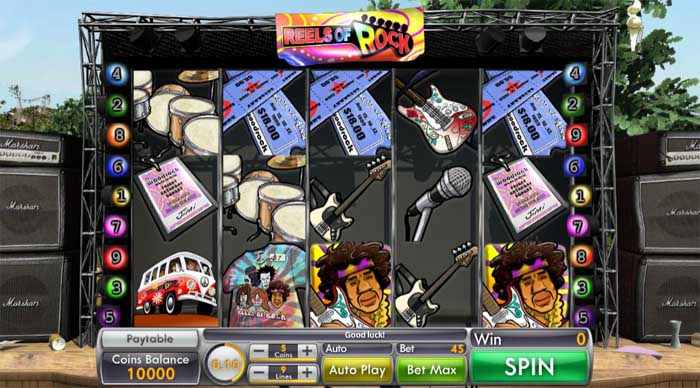 The layout in Reels of Rock is fairly simple, featuring 5 reels and 3 rows. There are also relatively few paylines, namely 9 of them. The betting range here starts as low as 9p per single spin and reaches a maximum of up to £22.50 per spin. You will find that you will be able to adjust your coin value and number of coins you would like to bet just below the reels. The RTP is very low, at 91%.

Reels of Rock boasts a total of three different special symbols and 2 whole bonus features. The more mundane of the special symbols is the Wild, which is in the form of rock legend Jimi Hendrix. He can appear in any position on the reels and replace any of the other symbols. However, the Wild cannot substitute for the Scatter and the Bonus symbols. 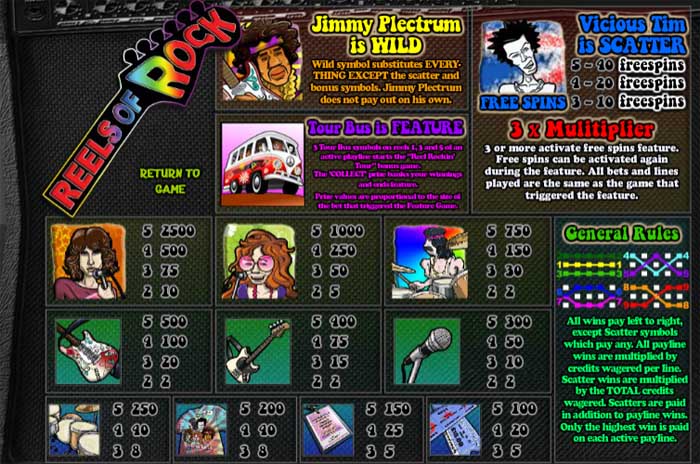 Sid Vicious represents the Scatter symbol in this game, and as such can reward you without having to land on an active payline. But what’s more, the Scatter can also trigger the freespins bonus feature. Look out for three or more Scatter symbols, as these will award 10, 20 or 40 freespins! The exact number will depend on how many Scatters you landed. What’s more, you will also get a 3x multiplier for all freespins wins. And in addition to that, you will also have the opportunity to retrigger the freespins by again landing at least 3 Scatters.

Last but not least we have the Bonus symbol, which is in the form of a tour bus. It can also appear in any position on the reels. And in order to make the most of it, you will again need to land at least three Bonus symbols simultaneously. This will trigger the Rock and Roll bonus game. In it, your objective will be to pick one of the four rock idols, who will, in turn, reveal your prize.

Reels of Rocks is a great nostalgic slot game that isn’t too pretentious in terms of its graphics. And in that sense – it’s right on spot, considering the theme. In addition, it offers two good bonus features, but the RTP is too low for our liking, set at only 91.00%.