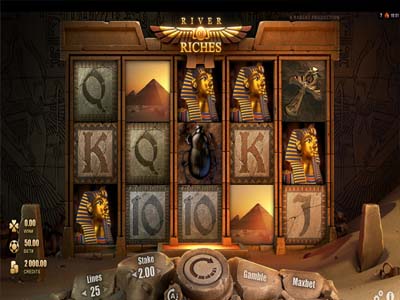 The Egyptian themed slot game must have been done at least once by every game developer out there. Some manage to produce a great game, and others fail at the first hurdle. However, Rabcat’s River of Riches manages to take the Egyptian theme and completely runs away with it in terms of both graphics and gameplay. You’ll find reels filled with icons of scarabs, ankhs, pyramids, Tutankhamen imagery, and thematically designed 10, J, K and Q icons. The game itself gives you the reel feel of being inside a pyramid tomb, with sounds of falling sand and scuttling scarabs all around.

It’s a five reel and three row game, and you’re able to customise the paylines that are included, maxing them out at 25 altogether. Your coin value is able to be altered between the minimum of £0.01 and the maximum of £20 per line, offering up a maximum overall wager of £500 per spin. A gamble feature after every win is also included, asking you to choose whether the next turned over playing card is black or red. Get it right and you’ll increase your winnings.

The game’s wild symbol is represented by the tomb explorer, and he will stand in for all other symbols to create a win, excluding freespin symbols.

River of Riches is definitely a well-designed game with enough additional extras included to make it a great choice.