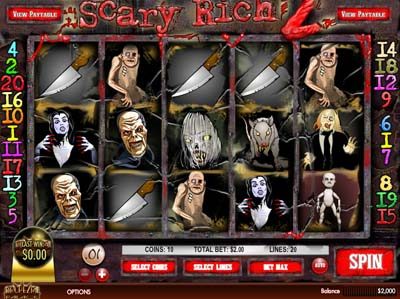 A haunting video package will introduce you to Scary Rich 2, which will then offer up reels filled with creatures from your worst nightmares. The game, created by Rival, features chilling vampires, gnarly giant rats, deadly zombies, and creepy clowns, to name but a few. Alongside these, you’ll get to experience a very chilling soundtrack, complete with serial killer intonations and dripping pools of what could possibly be blood.

The game offers up a five reel and three rows interface, and at the same time provides 20 customisable pay lines. You’re also able to change the game’s coin value from its minimum of £0.10 up to £0.50, as well as assemble the amount of coins per line between one and 10. This, therefore, allows players to place a maximum overall wager of £10 per spin.

The wooden coffin symbol acts as the wild in Scary Rich 2, providing you with an icon that will substitute for all others in order to create a win, except for scatters.

And speaking of scatters, these are represented by the werewolf icon. Spinning three or more of these during the main game will trigger 13 freespins of the reels, and this round will also feature expanding wild icons. These appear on the first three reels and also include multipliers of times three.

This game’s special features may be limited in terms of what’s on offer, but don’t let that be of any kind of dissuasion to you. Rival have thrown together a myriad of haunting monsters along with a particularly jarring piece of music to set the eerie atmosphere up from the get go for you. The icons are all well animated and the game will provide a great round of entertainment overall.