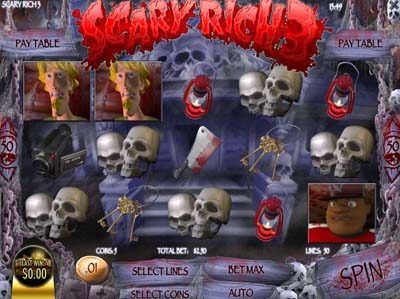 Building on the success of Scary Rich 2, this third instalment of the slot game from Rival puts players into the thick of the action. Featuring another haunting piece of music, much like its predecessor, this version of the game also offers up a round of creepy monsters on its reels. In comparison, this sequel utilises enhanced graphics to craft its symbols, which come in the form of mad scientists, skeletons, werewolves, and this time, there’s a selection of humans who have stumbled across the haunted house that all these creatures exist within.

The main game is made up of five reels and three rows, and a total of 50 pay lines have also been added by Rival. These can be customised by all players, as can the coin value included, which starts out at £0.01 and can be altered up to its maximum level of £0.25. Altering the amount of coins used per line will also shift up the total bet per round, which can be maximised at £125 with 10 coins of £0.25 in play across 50 lines.

The werewolf acts as this game’s wild symbol, and this will replace any other symbol on the reels to form a winning line. This is a regular wild during the main game, and turns into an expanding wild during the freespins round.

The crazy scientist guy provides the game with its scatter symbol, and three or more of these appearing anywhere will reward you with the aforementioned high-powered freespins. A total of six freespins will be given to you when three icons are displayed, 66 will be given with four icons, and a huge 666 will be offered up if you manage to spin five scatters.

Scary Rich 3 is another entertaining game in the catalogue of this developer. Although it has advanced graphics and game play, one can’t help but feel that they could have included some form of bonus game with this being the third in this series of games, and none of them having included such a round before. The RTP is also very low, making the game a very bad bet over all.