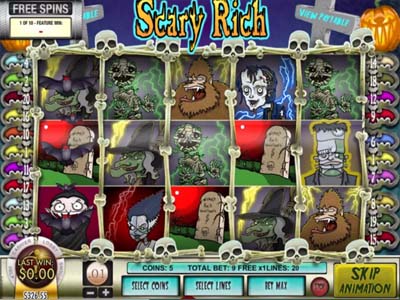 Scary Rich offers up a collection of ghoulish horrors on its reels, including Frankenstein, his bride, a scary Pumpkin-headed scarecrow, a witch, and all sorts of zombies and demons. It could just possibly scare you rich. The game itself, provided by Rival Gaming, is beautifully crafted, and features vivid colours, as well as intriguing graphics. You’ll also have the accompanying soundtrack progressing along with your gameplay.

The game offers up five separate reels, as well as three rows worth of an interface. There’s also a total of 20 customisable paylines. In addition, players can alter the game’s coin value from its minimum of £0.01 to its maximum of £0.05 per active payline. This allows all players to place a maximum wager of £10 across all 20 paylines per spin.

Frankenstein acts as Scary Rich’s scatter icon, and three or more of these icons appearing anywhere on the reels will activate 10 freespins. The feature also includes expanding wilds with increasing multipliers.

The symbol of the vampire represents the game’s wild symbol. This has a two times multiplier, and will substitute for other symbols on the reels to create a winning combination, except for the scatter. This icon will only appear on reels one, two and three during freespins.

There’s also a jackpot icon, represented by a raven. Should you spin five of these across a single active payline, you’ll be awarded a jackpot payout of 2000 coins.

For being one of Rival’s older products, Scary Rich still plays well and has many features of a newer game. Sure, the only real bonus round is the 10 freespins addition, but when you think about it, does a game like this really need to be overflowing with special features, when it is in itself, a special feature game?