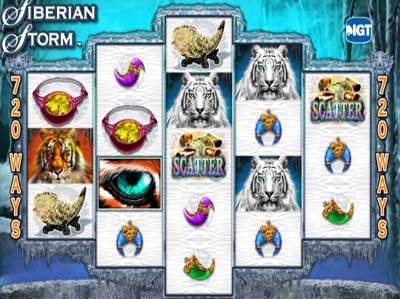 Imagine wandering across the cold frontier of Siberia. And as you go, you happen across a white, Siberian tiger. It’s piercing blue eyes stare a hole in you, only for it to disappear behind a wintry storm cloud. Siberian Storm invokes such mystery and wonder, providing players with reels that are filled with various different pieces of jewellery and artefacts, as well as a couple of different icons in the shape of tigers themselves. An adventurous piece of music will compel you on your way every time you spin the reels, adding extra suspense and drama to your game play.

Five reels are available in this game, while the rows are staggered in a 3 x 4 x 5 x 4 x 3 formation. There are 720 ways to win included alongside, and the incorporated coin value is able to be changed from the minimum of £0.01 and the maximum of £10. All coins are multiplied by the fixed rate of 50, thereby allowing all players to place a maximum overall wager of £500 per round.

The game includes a wild symbol, represented by a full length image of a white tiger with the word, ‘WILD’ below it. This appears only on the central three reels, and will substitute for all icons, except the scatter, in order to form a win.

There’s also a scatter icon in the game, and spinning three or more of these will multiply your wager placed by times two, times 10, or times 50, depending upon the amount in view.

The close up of the tiger’s blue eye acts as the trigger for the freespins round. If you spin five of these in any position across the reels, you’ll be granted eight freespins. An additional eight freespins can be won by spinning five more of these during the same round. This can continue being re-triggered, and the freespins will continue until all have been used, or until 240 freespins have been played.

Siberian Storm is one of the games that has come to represent IGT since its introduction, which is by no means a bad thing. Freespins, scatters, wilds and wonderful graphics and music are nothing to baulk at.