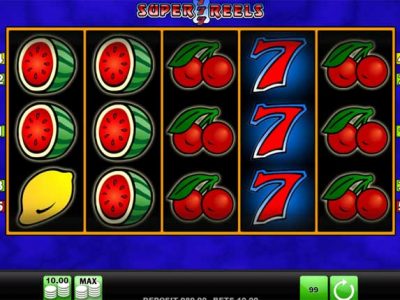 Super 7 Reels is yet another slot game by developer Merkur that pays tribute to the vintage one arm bandits we’ve all grown to recognize instantaneously. This slot game, as is custom in the genre, features all the most typical icons you might expect to see in an old school slot machine. The design and soundtrack are equally generic and simplistic, featuring a basic blue backdrop. The symbols on these reels include the characteristic fruit icons, such as the cherries, lemons, plums and oranges. Following them is another star, which makes way for the higher value fruit symbols of the grapes and watermelons. Finally, there’s the lucky number 7, which is also the highest paying symbol on these reels.

Super 7 Reels features a pretty standard layout of 5 reels and 3 rows. There are only 5 paylines and they are fixed, therefore, you will not have the opportunity to adjust their number. The betting range here is also pretty common for Merkur games, spanning from 5p per spin up to £10 per spin. Furthermore, the RTP in this slot is at the 96.12% mark, which, too, is most times the case with games by this manufacturer.

A point worth making here is that players will have it easier in landing winning combos. That is made sure by the fact that winning sequences don’t necessarily need to start from the leftmost reel. In fact, winnings sequences can pay from left to right, as well as from right to left. So all you need to worry about is having three or more symbols of the same kind on an active payline. What’s more, all symbols here can appear stacked on the reels. 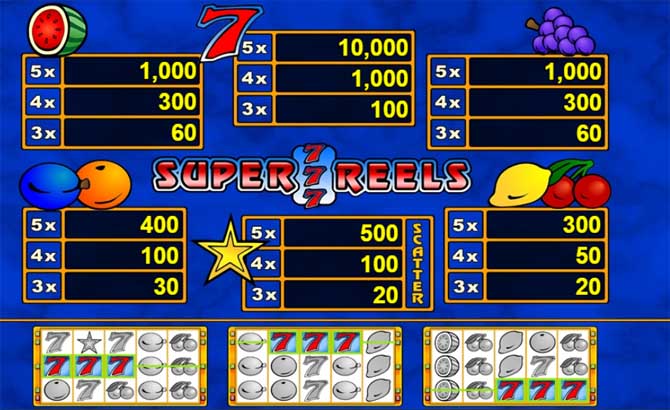 However, the only symbol that cannot appear stacked is the Scatter. Yes, this slot features a Scatter symbol. It comes in the shape of the gold star and can appear in any position on the reels. But to make the most of it, you will be looking to land at least three of it during a spin. Other than this symbol, though, there will be no other special symbols for you to benefit from. This means no Wilds, and no actual bonus features.

You might like to give the Gamble feature a try, though. It will offer you the opportunity to gamble your winnings after each successful spin. Moreover, you will actually have the chances to choose the exact side game you would like to play. The first will require you to guess the correct color of the top card in a stack of playing cards. This game is double or nothing, so a correct guess will double your amount, whereas a wrong one will take it away. As for the second game, it involves climbing a ladder, which will also multiply your winnings.

Super 7 Reels uses a high quality gaming platform, meaning you can enjoy smooth and easy gameplay. However, the lack of bonus features may not appeal to everyone.