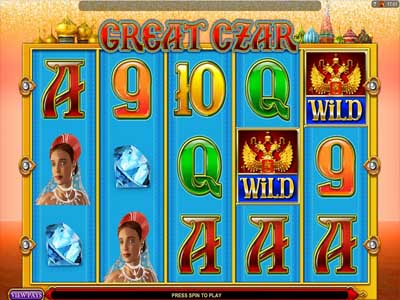 The Great Czar will take you back to the days of the Russian imperial empire, with the reels ornately decorated with imagery of the Kremlin and other such architecture. Alongside this, you’ll find symbols of diamonds, trinkets and other such expensive and gleaming treasures have been incorporated into the game, as well as icons of the supposed Czar and his wife. These are all included alongside the standard A, J, K, Q, 9 and 10 symbols.

This five reel and three row product from Leander Games presents players with a total of 30 paylines, all of which are able to be customised to your own personal preferences. The included coin value can be changed between the minimum of £0.01 and the maximum of £0.05 per line, and players can choose between playing one coin or up to five. Therefore, with these totals, a maximum wager of £7.50 per spin can be placed across all 30 lines.

The symbol of the Russian shield acts as the game’s wild icon, and this will substitute for any other to create a winning combination, except both bonus and scatters.

And speaking of the scatter and bonus icon, this is one and the same, and is represented by the crown. This will first provide a multiplier of your total wager, which increases with the amount of symbols showing. Then, three, four, or five bonus symbols in any position will trigger the ‘Imperial Crown’ freespins bonus round. Winning paylines during this round are multiplied by a multiplier selected by the player at the beginning of the bonus round.

This game provides a small insight into the Russian Empire in its days of Czars and ultimate wealth. The soundtrack that is included in the game is mildly irritating at times, but fortunately, there’s an included mute button. Aside from this, the inclusion of the freespins round makes for a more intriguing product, and The Great Czar is definitely a game worth trying.