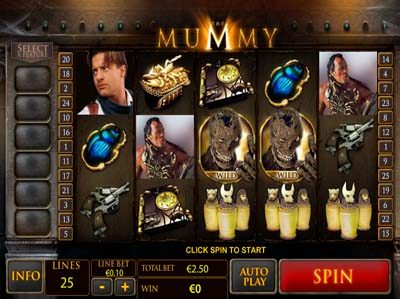 The Mummy was one of the biggest film releases in the year of 1999, and as such, spawned several sequels and prequels. It has also been the basis behind Playtech’s decision to create a game on it, presenting enthusiastic movie fans with the ability to relive many of the scenes via a video slot. Due to it focusing on this theme, the reels are filled with various characters from the film, including Arnold Vosloo as Imhotep, Rachel Weisz as Evelyn Carnahan, Dwayne Johnson as The Scorpion King, Patricia Velázquez as Anck-Su-Namun, and Brendan Fraser as Rick O’Connell. There’s also various different Egyptian-themed icons, including sarcophagi, scarabs and the book of the dead.

The game itself is played on five reels and three rows, and Playtech have also included a total of 25 separate pay lines. These are fixed in place, so customisation is not possible in this area. However, players are able to alter the bet placed with the plus and minus buttons below the current total shown. This ranges between the minimum level of £0.05 and increases up to £1 per pay line. This allows players to place a maximum overall wager of £25 per spin. An ‘Auto Play’ button has also been added to allow gamers to play up to 99 consecutive spins at the same wager level.

The Mummy icon acts as this game’s wild symbol, and as such, it will substitute for any other symbol on the reels, except for scatters, bonus icons and freespin symbols. Wilds will only appear on reels two, three and four.

As far as the scatter symbol goes, this is represented by the game’s logo, and pays out wherever it should appear on the reels.

Also, during the main game, you have the possibility of randomly triggering the ‘Lost City Adventure Bonus’. In the Lost City of Hamunaptra, you must pick boxes to receive cash prizes and unlocks further features. You should also be able to unlock one of eight different features to become active in the base game at the same time. Six of these eight features will appear at the side of the reels, which are ‘Scorpion Scatter’, ‘Expanding Mummy’, Scarab Attack’, ‘Collapsing Reels’, ‘Mummy Power’ and ‘Mummy Re-Spin’. Of course, each of these features has a different effect on the main game, and they can be activated at any time during game play.

Playtech have definitely gone all out with this one, which is exactly what we want from a game based on an action/adventure film. It’s full of twists and turns and tells the story even better than the big screen cinema version!