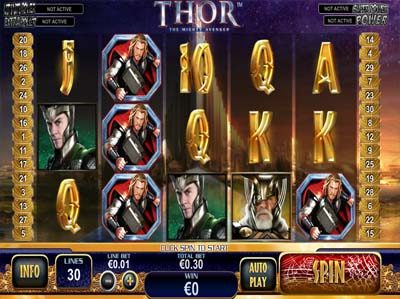 If you never read the Marvel comics about Thor as a kid, there’s a strong possibility that you’ve seen at least one of the film adaptations, starring Chris Hemsworth as the Nordic god himself. This game is centred around the film version of the theme, and incorporates icons of characters from it, including the aforementioned centre character. There’s also the inclusion of Tom Hiddleston as Thor’s treacherous brother Loki, Anthony Hopkins as their father Odin, Idris Elba as Asgardian sentry Heimdall, and the Warriors Three – Hogun, Fandral and Volstagg. There’s also the inclusion of Jaimie Alexander as the character Sif.

This Playtech product is played on a layout of five reels and three rows, while a total of 30 separate pay lines have also been included. These are not customisable, but players can alter their bet placed per round with the relevant plus and minus buttons. This starts from its minimum of £0.01 and increases up to a maximum amount of £20 per line. So, overall, gamers of this product have the opportunity to place a maximum overall wager of £600 per spin.

The icon of Thor provides the game with its wild symbol, and this appears stacked on reels two and four in the main game. Should it cover reel two, a ‘Thunderstorm Re-Spin’ is triggered, while if it covers the fourth reel, a ‘Lightning Freespin’ will be activated.

Heimdall has the possibility of being able to cover the entirety of the middle reel, and if he does, you’ll trigger the ‘Free Games via Rainbow Bridge’ feature. You’ll be presented with two orbs, one of which you will need to choose to reveal your next destination. You’ll proceed on to either Earth or to Jotunheim, each of which provides one of the game’s freespins rounds. Each of these rounds is played on special reels, and both add extra wild icons to the rounds as well.

Furthermore, because this is one of Playtech’s collaborative efforts with Marvel, gamers will also be able to access the inclusive progressive jackpot, which is available via all such products from this developer. The round is accessed randomly, as are the four inclusive jackpots.

This game provides a wonderful take on the film of the same name, and in doing so, presents a wonderful gaming experience based on a well-known and loved character.