Treasure of the Pyramids 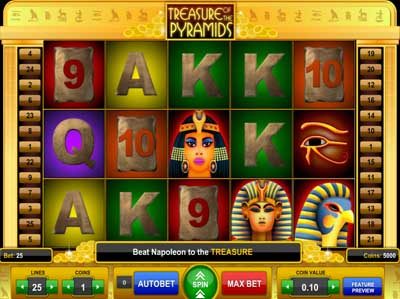 Treasure of the Pyramids Slot Review

Treasure of the Pyramids is an Egyptian themed slot game by software manufacturer 1X2Gaming. This slot game has a distinctly mysterious vibe to it, mainly achieved by its oriental soundtrack. The graphics, as you will be sure to notice, aren’t too great. There’s no sophistication, no high definition quality or anything of the sort here. The frame of the reels does have a nice touch to it, though, glistening with all the gold coins and lined with ancient Egyptian hieroglyphs. The symbols here include all the regular lower value playing card icons: A, K, Q, J, 10 and 9. Aside from them you will also see the Eye of Horus, and Egyptian queen and the mask of a pharaoh. 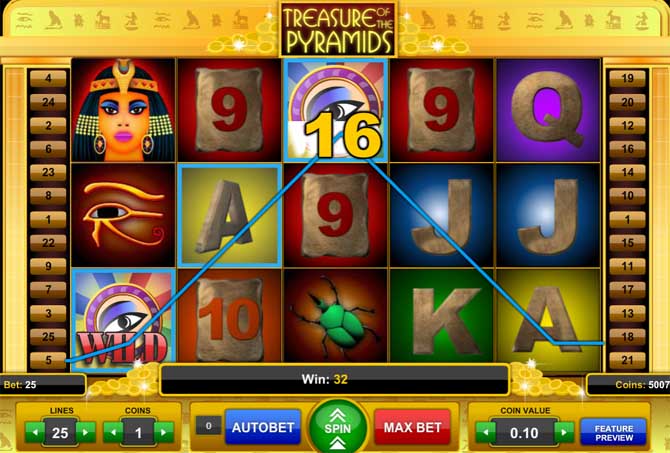 The layout in Treasure of the Pyramids features 5 reels and 3 rows. You will also notice that there are 25 paylines in total here. However, the controls just below the reels will allow you to lessen the number to whatever is more comfortable for you. The same goes for the amount of coins you would like to wager, as well as their value. This means your betting range will start at only 5p per spin and reach a maximum of a whopping £1250 per spin. As for the average RTP, you can count on roughly 96.22%.

Treasure of the Pyramids boasts a total of two whole special symbols. One of them is none other than the Wild, which depicts an eye. It will also replace any of the other symbols in this game to help create winning sequences. However, the only exception to that rule is the Bonus/Scatter symbol. 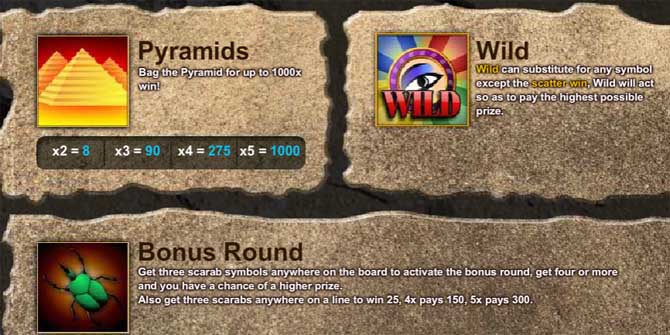 The Scatter, in turn, pictures the iconic Scarab beetle. In order to benefit from it, you don’t need to worry about landing it on a given payline. Nevertheless, doing so will result in additional payouts for you, which certainly won’t hurt. Landing three or more Scarab Scatters will trigger the single bonus feature. But landing them on a payline can also guarantee you a cash prize of up to 300 coins.

As a result, a new screen will present you with a pick-me bonus game. Notice that the graphics here are of substantially better quality than those in the base game. What’s more, they have a 3D feel to them. The bonus game will offer you three different artifacts to choose from in order to reveal your cash prize. You will have an urn, a sarcophagus and the statue of Nefertiti at your disposal. Choose wisely, as you will have the opportunity to score pretty big, if you’re lucky. In addition, keep in mind that the prizes will also depend on the number of Scatters you landed. The more Scatters there were – the higher your potential wins will be.

Treasure of the Pyramids is a very basic, very simplistic slot game with a fast pace. The bonus game here won’t last long at all, but it does have the potential of landing you some big wins.