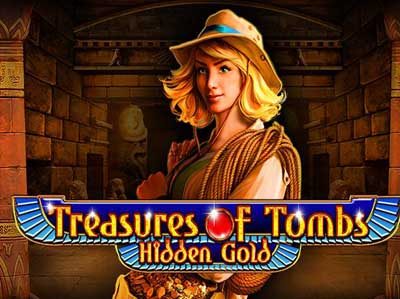 The theme of ancient Egypt in slot machines isn’t a new one, but still never fails to attract players. Treasures of Tombs Hidden Gold is brought to us by online slot machine manufacturer Playson and, traditionally for this developer, the graphics and soundtrack are pretty amazing. The upbeat oriental music really creates that distinct outlandish vibe that you would want from a slot like this. Set deep inside a pharaoh’s tomb, the backdrop offers a blurry glimpse of the treasures it hides. As for the symbols here, they are a mix of lower value playing card symbols and traditional Egyptian imagery. For example, you will see the widely recognizable Eye of Horus, as well as the Scarab beetle. The most lucrative symbol, however, is the female explorer. 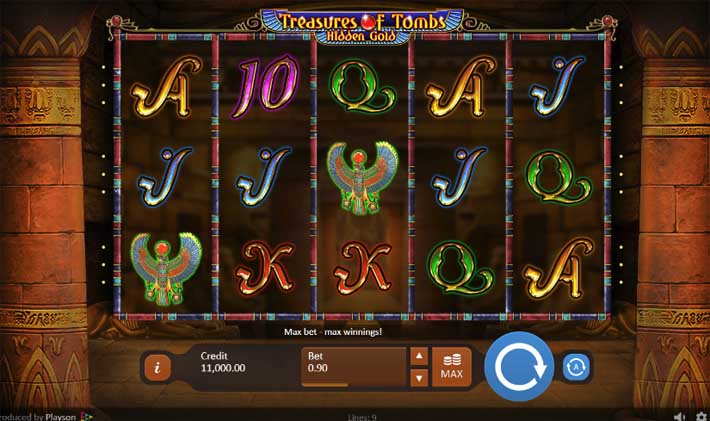 There are 5 reels and 3 rows in Treasures of Tombs Hidden Gold, and only 9 paylines. Their amount is fixed, so you won’t have much freedom to adjust them. Wager amounts here, however, are unexpectedly high, starting at 27p per spin. The maximum amount you will be able to best in this game is £45 per spin. The RTP isn’t all too pleasing either and is just over the 95% mark.

Treasures of Tombs Hidden Gold features a single special symbol during the base game. We already mentioned it earlier – it’s the Eye of Horus symbol. Here it’s only referred to as the Eye. It certainly isn’t the most lucrative symbol on the reels, but fulfills the obligations of two different kinds of symbols in one. First of all, it acts as a Wild and can replace any of the other icons in this game to contribute to winning combinations. You can also expect to see it in any position on the reels, which doesn’t hurt.

Furthermore, the Eye symbol also acts as the game’s Scatter. As such, it can offer payouts, regardless of where the symbols land. But what’s more, it will be responsible for triggering the single bonus features in this slot game. By landing a minimum of 3 Scatter symbols anywhere on the reels during a spin, you will activate the freespins bonus feature. As a result, you will receive a total of 10 freespins.

However, before the freesins begin, one of the regular symbols will become an extra Bonus symbol. As such, that Bonus symbol will offer you payouts without necessarily having to land on an active payline. What’s more, though, you will also be able to retrigger this feature by landing another 3 or more Scatters. This will award you another 10 freespins, and you can do this several times. The maximum number of freespins you can receive during the same bonus round is 50.

Treasures of Tombs Hidden Gold is a fun kind of game, especially if you’re into adventure slots. The graphics here and the general atmosphere are really inviting and make it pleasant to spin the reels. As far as volatility goes, this is a medium to high variance slot.