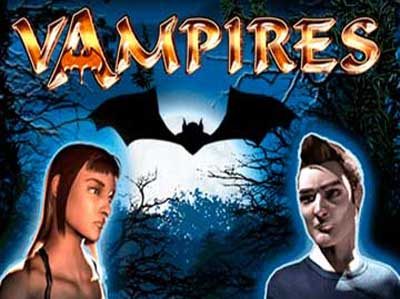 Vampires is a video slot by game provider Merkur. Obviously, the theme is a spooky one and has the undead as its focal point. There’s a 3D feel to the graphics, which may be a little much once you see the character symbols. But besides that it does pretty well in creating a compelling overall atmosphere. The backdrop shows you a creepy forest, beyond which is the even creepier vampire castle. Note the grim gargoyle statues standing watch on either side of the reels, each standing atop stone pillar. There’s a pretty decent backing track playing when you spin the reels, as well. But it stops playing immediately as soon as the reels stop. 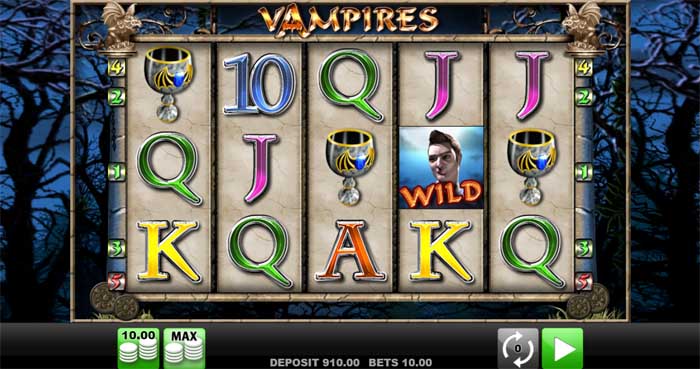 The symbols in Vampires are more of a real attraction, though. They include the less valuable playing card symbols, alongside the thematic symbols. The playing card icons are nicely styles, even though they’re in their typical bright colors. They are A, K, Q, J and 10. This brings us over to the higher value thematic icons, starting with the very sharp sword and decorated hilt. Next is a goblet with the same colors as the sword hilt and a big bat on it. After that we have a symbol depicting the haunted castle, alone against the night sky and full moon. Then last but not least, we have a female character as the most valuable paying symbol on these reels. As for the slot design, it features 5 reels and 3 rows, with a total of only 5 available paylines. These lines are fixed and you cannot regulate them. And this also affects the betting range accordingly, with the minimum stake being just 5p per round. The maximum bet you will be able to place on these reels, on the other hand, is £10 per spin. In addition, there’s an agreeable RTP of 96% in Vampires by Merkur Gaming.

There’s also a male character symbol on these reels, and he is the game’s Wild symbol. The Wild can appear in any position on the reels, it will also be able to stand in for any of the other symbols here. Better yet, there are no exceptions as to the symbols that the Wild can substitute for. And that is because the Wild is also the game’s Scatter symbol. It isn’t particularly lucrative in terms of the payouts that it offers. However, it doesn’t need to land on an active payline in order for you to benefit from it. 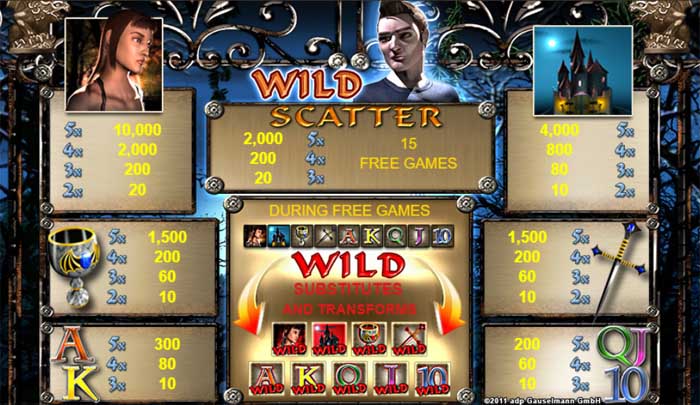 And on top of that, by landing at least 3 Wild/ Scatter symbols at the same time during a spin, this will trigger the one special feature this title boasts – the freespins bonus round. Once you have trigger it, the game will award you a total of 15 freespins. But keep an eye on the Scatter and Wild symbol during the freespins round as well. You will want it to help complete a winning combination in the special feature. If this happens, the Vampire will unleash vampire bats onto the reels. They, in turn, will land on the symbols forming the winning sequence and will turn them into Wilds. Better yet, these wild symbols will remain so for the duration of the freespins bonus. 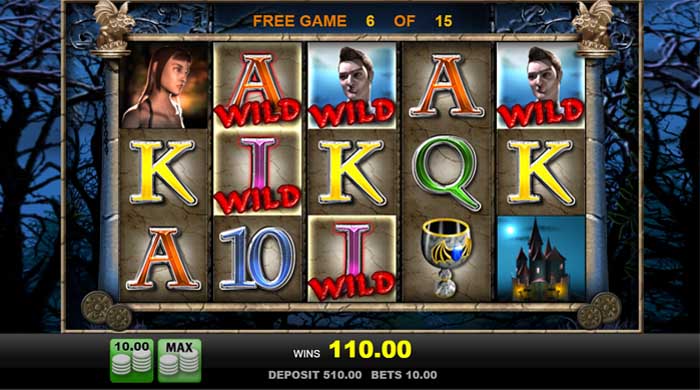 Besides the main attraction, though, this online slot game also has a little side feature to spice up the base game. To be more precise, it’s a Gamble feature. And you can take advantage of it every time you land a winning spin. The feature will allow you the opportunity to gamble your prize from the said spin and potentially increase it. You can, of course, also choose to pass up on the opportunity and simply collect your winnings, so you can move on with the game.

But you can also choose to gamble your winnings in one of the two available side games. One is the card game, where you will need to correctly guess the card color, which can either be red or black. A correct guess will double your amount, and you can proceed to a next one or collect your wins and resume the base game. Note that one wrong guess will rob you of your amount altogether, though. And the second option is an equally simple ladder game, where you can keep climbing it to double up your prize.

Vampires is a very basic online slot game with an overly simple approach to gameplay. There are only 5 paylines, one special feature and even a two-in-one special symbol. The graphics strive to be modern and sophisticated, but we think it would be a stretch to really call them that. Nevertheless, it’s an overall decent and highly entertaining high variance offering with pretty good winning potential. Of course, most of it comes with the additional Wilds in the freespins bonus round. Plus, the Gamble feature makes for a good touch, too.

If you are a fan of the high variance slot titles from Merkur, you will definitely like Vampires as well.