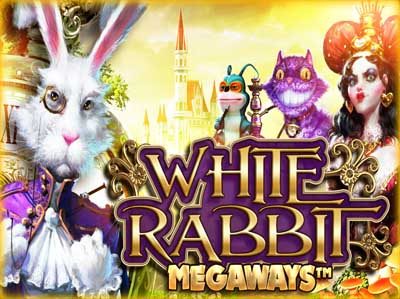 Plenty of software developers have tackled the theme of Alice in Wonderland, and we’ve seen some average to pretty impressive titles over the years. White Rabbit by software provider Big Time Gaming, though, would certainly be among the latter. For one, it features some rather stunning visuals with high quality 3D graphics. And for another, it really does relay that compelling atmosphere we once we a part of when reading about Alice’s adventures. There is a very decent soundtrack that will accompany gameplay. And it goes really well with the tall mushrooms and the other bizarre vegetation in the backdrop. Furthermore, you even get to play alongside one of the most memorable characters in Alice in Wonderland – the caterpillar. He will be resting peacefully right beside the reels, holding onto his hookah pipe. 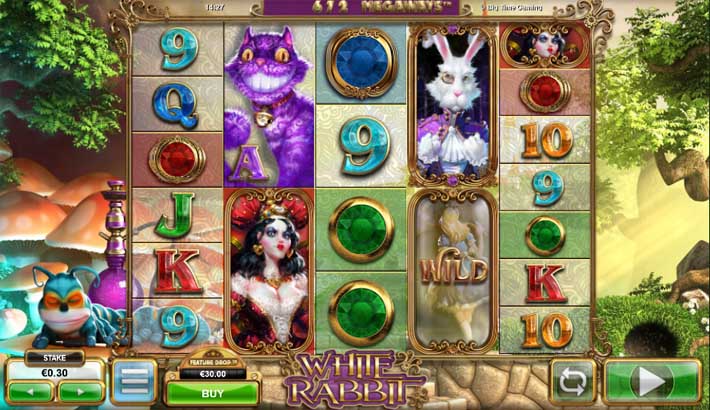 As for the slot icons, they are a real treat to look at. Even the lower valuable icons, which are also present in this slot, are integrated with some of your favorite characters. The symbols in question are A, K, Q, J, 10 and 9. But occasionally they can appear stacked on the reels, at which point they will reveal the different characters. Among them are the Cheshire Cat, the Mad Hatter, Tweedledee and Tweedledum and the Dodo. Next up are 4 higher value icons, starting off with three different colored gemstones. Each is round in shape and has a golden frame around it. They are the emerald, sapphire and a deep red ruby. Then finally is the most lucrative Red Queen, who can offer payouts of up to 25 times your stake. There are five reels on the screen, however, this is a Megaways slot game. In other words, the reels can have up to 7 symbols in the base game and up to 12 symbols in the bonus feature. Therefore, in the base game you can enjoy up to 16,807 ways to win, whereas in the bonus game these can extend to a whopping 248,832 ways to win.

What’s more, White Rabbit also boasts a very generous RTP of 97.39% in the base game and 97.72% if you buy the bonus in the Feature Drop.

The Wild symbol, depicting Alice through a misty mirror, can appear only on reels 2, 3, 4 and 5. It doesn’t offer any payouts of its own either. But it stands in for any of the regular icons on these reels and help complete winning sequences while it’s at it. This will, in turn, help to generate more wins and increase your potential for pocketing higher prizes. There are three symbols in total, for which the Wild will not be able to substitute. These are the Scatter, the Cupcake and the Feature Drop symbols.

The Scatter comes in the form of the White Rabbit himself and can only appear on the middle reels 2, 3 and 4. Your goal will be for it to land on all three reels at the same time (hence, all three symbols). This will trigger the game’s freespins bonus round, as a result of which you can benefit from 15 freespins. During this feature you will enjoy the Extending Reels feature, where a reel can have up to 12 symbols on it. Likewise, the ways to win will also increase dramatically. 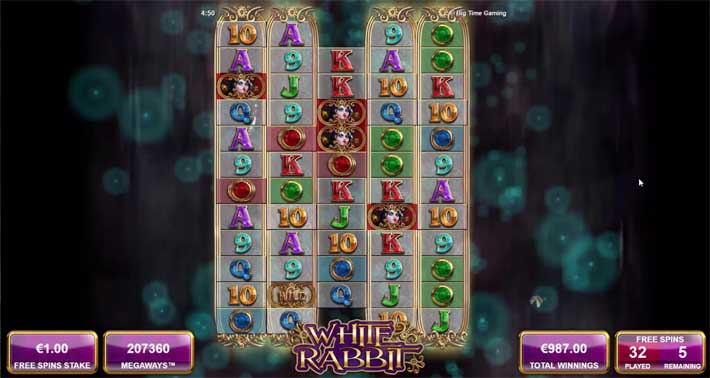 Instead, keep an eye out for the Cupcake symbol. Whenever it lands on the reels, its place will be taken by two other symbols. And when this happens the reel will increase by one symbol in height. Hence, this will also increase the ways to win. What’s more, when a reel reaches its maximum height of 12 symbols, it becomes a Queen’s Reel and also retriggers the feature where you will get anything from 1 to 12 extra spins. The Queens Reel will also benefit from extra Red Queen and Wild symbols.

Buy the bonus feature with the Feature Drop function

In case you don’t feel like waiting to trigger the bonus feature yourself, you can make use of the Feature Drop. You will basically be buying the freespins for whatever amount is on the screen at that moment. And at that point the freespins will begin automatically. The slot RTP is very high in the Feature Drop, with an average payout of 97.72%. Take not that the variance in this game is very high, so this is average calculated payout over many features. The Feature Drop function is a great addition to this game as you can chose to buy the feature if you don’t have the patience to trigger it in the base game. 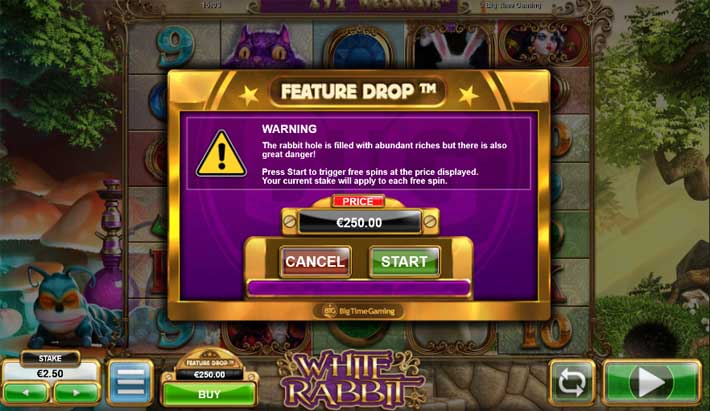 Last but not least, there’s also a random feature that can take place at any point during the base game. Just keep an eye on the Caterpillar, as he will be the one to trigger it. He can blow smoke rings onto the reels to add up to 4 Bonus Wilds to them. Furthermore, these can offer a multiplier of 2x or 3x on any winning combos they partake in. Most of the time, this feature will not create any big wins, but once in a while it can be very lucrative if you get several multipliers at once. 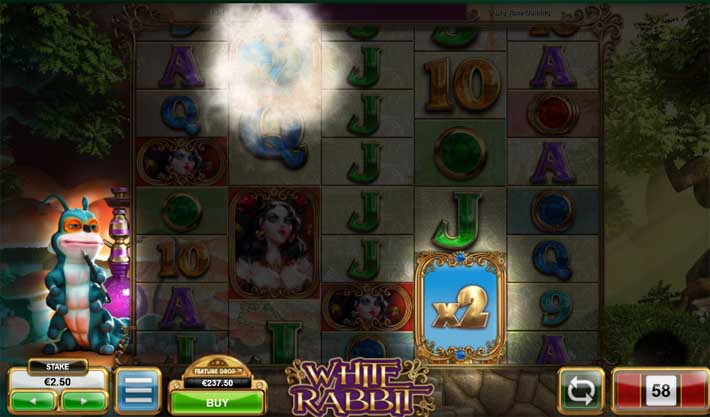 Many players will be wondering what the correct strategy in White Rabbit is. While this is a slot game and there usually isn’t a lot of strategy involved, White Rabbit is a bit different as there are two different ways you can play this online slot machine. The base game in White Rabbit can produce big wins, but they are few and far between and most of the potential lies in the bonus feature, which can, if you are lucky, produce some monster wins. The question then becomes, should you play the game like you would play any other slot machine, or should you go ahead and just buy the feature?

If you look at it from a purely mathematical standpoint, the correct strategy in White Rabbit is to buy the feature using the feature drop, as this has the best RTP of 97.72%, which is 0,33% better than if you play it by just pressing spin. On the other hand, buying the feature could end up costing you, so if you go down this route, make sure you don’t bet your entire bankroll on a single feature.

There is nothing wrong with playing this game without buying the feature as well, and considering it cost 100x your bet to buy the feature, it is a great feeling when you trigger the bonus feature naturally in the base game. The RTP is as mentioned a little bit lower, but the RTP is still very good at 97.39%.

It really comes down to what you prefer, some players will play this game by only buying the feature, and some will never buy a feature, it all comes down to personal preference, as both ways of playing it is a good bet with the high RTP of this machine.

Big Time Gaming keeps on releasing really innovative and exciting slot machines, and White Rabbit is no exception to this rule. White Rabbit offers an array of bonuses and extras to enjoy and there’s just a lot to like about this offering. The visuals are fantastic, the theme is a relatively popular one and on top of that there’s the major winning potential in the bonus feature. And who doesn’t enjoy some cool animations that are incorporated into gameplay?

The bonus feature in White Rabbit is undoubtedly extremely exciting and has one of the highest potential for a crazy big win of any slot machine out there. The really big wins won’t be easy to get of course, but if you land all those cup cakes and manage to get a few “Queen reels”, you know you are in for a big one. If you get all the reels to become Queen Reels, you can count on the win to at least be several thousands times the free spins stake.

As with all slots from Big Time Gaming, some players will be divided in their view of this slot, and since it is a high variance offering, some will maybe find it a bit tedious as the wins can be few and far between, but if you are a fan of the high variance slots that can occasionally produce the super big wins, this is the slot machine for you. Keep in mind that White Rabbit can eat your balance quick if lady luck is not on your side, and adjust your bet size accordingly.

All things put together, White Rabbit is in our opinion a really innovatiove slot offering from Big Time Gaming and one of the best online slots ever created.