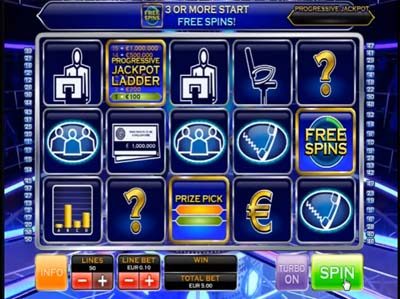 Who Wants to be a Millionaire Slot Review

We’ve all seen, or heard of, the popular television show, ‘Who Wants to be a Millionaire?’, right? Well, if you haven’t, you’ve no doubt been living under a rock, as it’s one of the most popular game shows on TV today. However, not everyone will be able to compete on such a show, so it’s fairly fitting that Ash Gaming has brought forth a slot game based on it instead. Featuring the infamous theme music, along with several icons that relate to the show, such as its logo, ask the audience symbols and others, this game will give you as thorough an experience as ever.

The game is actually a five reel, three row, 50-paylines online slot adaptation of the series. The wager that can be placed per active pay line is able to be changed from its minimum of £0.02 up to the maximum of £10.00, therefore allowing a total overall maximum wager to be placed of £500 per spin. A turbo mode button is also included to speed up proceedings.

The wild symbol in this game is an icon of a freeze frame from the show’s opening credits. This will act as a stand in for all others, except scatters, to make a winning combination.

There’s also a freespins icon, which works as a scatter symbol. Spinning three or more of these will provide you with 10, 15 or 20 freespins, depending upon the amount of scatters visible when triggering the round. During the feature, shifting wilds become active on the reels.

In addition, landing three or more ‘Prize Pick’ scatter symbols on the reels will trigger the relevant bonus round mini-game. This requires you to pick a symbol from the screen for an instant win!

Finally, what would a game like ‘Who Wants to be a Millionaire?’ be without a progressive jackpot included? Spinning three or more scattered ‘Jackpot Ladder’ icons on the reels will activate the ‘Jackpot Ladder’ round. In this, you press the play button and are given a random answer, which could be ‘Collect’, ‘Mystery’ or ‘Advance’. If you’re able to get to the top of the jackpot ladder, you’ll be rewarded with the progressive!

For a game that takes all the thrills of a television show and turns them into an appealing slot game, you should definitely try out ‘Who Want to be a Millionaire?’