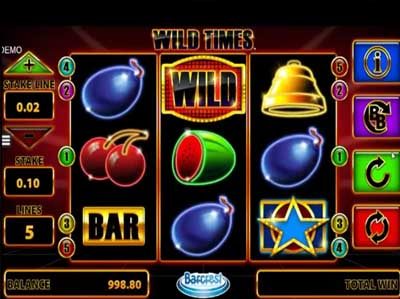 Wild Times is among the latest releases of slot game developer Barcrest. Barcrest games are typically known for their relatively complex gameplay and the possibility of playing in two different modes. This particular game offers all the traditional slot machine symbols, but we can’t say we’re too impressed with their style and the graphics quality this time. The lower value symbols start off with the customary cherries, lemons, oranges and plums. Further on is the watermelon and Bar symbols, following which is the familiar gold bell and a blue star symbol. Last but not least is the highest paying symbol on these reels – the red star symbol.

Even the layout of the reels is very retro style, featuring only 3 reels and 3 rows. Depending on the mode you choose, you can play with either 5 paylines or 27. The RTP in this game also strongly depends on the mode you choose to play in. Thus, the regular game will have an estimate of 94%, whereas the Big Bet mode can have up to a largely satisfying 98%.

Players might find it a bit disappointing, but there aren’t any real bonus features here, not in the traditional understanding that is. There are no freespins, no interactive side games – but that’s just how it is with vintage themed slots. However, that’s not to say that this game has nothing to offer whatsoever. First, let us point out that there is in fact a Wild symbol here. As such, it may replace any of the other symbols on the reels in order to help create winning sequences. Do keep an eye out for it, though, as it only appears on reels 2 and 3. 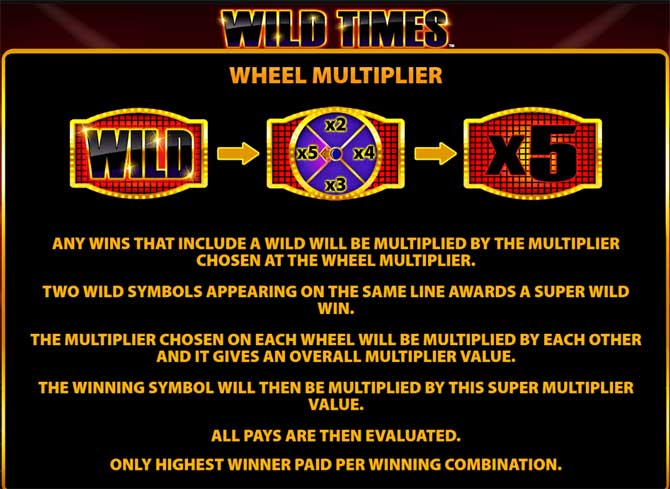 What’s more, each time you land a winning combination with a Wild symbol in it, you wins will become subject to a multiplier. The multiplier, in turn, is chosen by a Wheel Multiplier and can be 2x, 3x, 4x or 5x. And if you have a combination with 2 Wilds in it, it gets even better. There will be two Wheel Multipliers to reveal two different multipliers. Those will be multiplied by each other and applied to your winnings.

And then let’s not forget the hallmark Barcrest feature – the Big Bet mode. The possible stakes include £10, £15, £20 and £25 per 5 spins. This will increase the number of paylines from 5 to 27 throughout the duration of the feature, as well as the Wild Multipliers. The higher you betting amount – the higher the multiplier value can be with a maximum of up to 10x per Wheel Multiplier. So, ideally, you could count on receiving a maximum multiplier of 100x, when playing with the highest stakes.

Wild Times is simpler than other games by this developer in the sense that it doesn’t include exciting bonus games. Whether or not the potential of gaining an insanely high multiplier makes up for it, is of course for every player to decide for themselves.