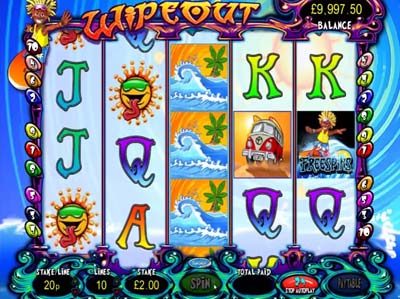 Fans of surfing will feel right at home with this Wipeout game offering from Barcrest as it takes you right into the middle of the waves. It’s quite a nice option to play from this developer, featuring a great underlying theme and special features. The reels are filled with symbols relating to such, although they begin with the often used A, J, K and Q icons. These are joined by an icon of the sun, another of what appears to be a hippy camper van and a third of a big wave just waiting to be caught. There’s also the inclusion of a funky soundtrack alongside.

The game is presented to players on five reels and three rows and has 10 pay lines. You can customise these to suit your own personal preferences, and there’s also the chance to customise the bet that you place per round too. This is done by changing the stake per line between its minimum of £0.02 and increases up to £50. This means that there’s a high stake possibility of £500 per round.

Barcrest have added a couple of specialities into this game, beginning with the wild icon. As a wild symbol, it will substitute for all others on the reels, except for the scatter, to generate a winning combination.

The noted scatter symbol is represented by the surfing dude, and he will pay out wherever he shows up. Three, four or five of them coming into view will also trigger the freespins round, which is activated automatically. On triggering this round, you will receive a bonus of five, 25 or 250 times your total bet for landing three, four or five scatters, respectively. You’ll also start the round with three lives.

During freespins, a headshot of the surfer will award an extra life, while a wipeout symbol will remove a life. Freespins will continue until all of your lives have been used up, and if you survive for 25 freespins, you will receive a bonus of 20 times your total bet, while 50 freespins will give you 200 times.

Offering up a great theme, this one is definitely appealing from the get go. It’s not one of the best games for graphics, but the overall game play is entertaining enough.