Diamond Chief is a slightly unusual slot game by software provider Ainsworth Game Technology. It offers a unique setup and a visually abundant animal theme. The backdrop will take you to a jungle, with plenty of lush vegetation to offer a nice contrast for the reels. Typically for this slot developer, there won’t be any real soundtrack to either contradict or contribute to the theme. The only sounds will be the reels clicking as you spin them. And as far as the symbols go, they also include the lower value playing card symbols. Those are styled in the same way as in most slots by this manufacturer. And the rest of the symbols picture a hippo, a gorilla, a bird, an elephant and a small waterfall. 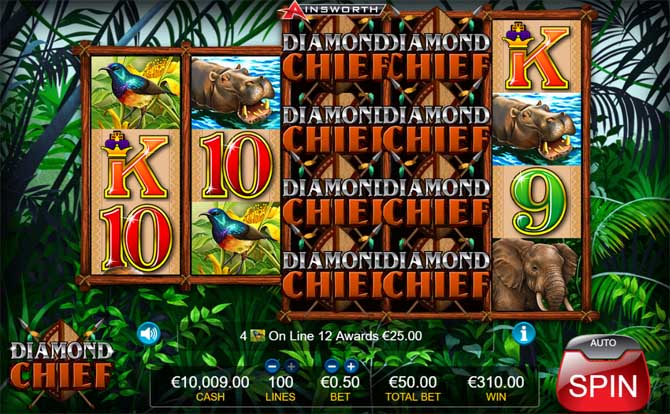 As we already pointed out, the setup here isn’t quite what you see in most other slot games. There are 5 reels, but the first two only have 3 rows, whereas the other 3 have 4 rows. There are 100 paylines in total, but if that sounds like an unholy number to you, you can always adjust it to play with less. Stakes are on the high side and start at £1 per spin, reaching a maximum of £75 per spin. You can expect an average RTP of about 94.37%.

The Diamond Chief logo is the game’s Wild symbol. It can only appear on the right-most three reels 3, 4 and 5. However, as it is a Wild symbol, it has the capacity to stand in for any of the other symbols on the reels to help create winning combos. What’s more, it can also appear stacked on the reels, making for even better winning chances. The one symbol it cannot stand in for is the Scatter.

The Scatter pictures a large diamond symbol, which can appear in any position on the reels. It can prove rather lucrative with payouts of up to 50 times your stake. But it is also responsible for triggering the single bonus game – the freespins feature. In order to activate the feature, you will need to land at least 3 Scatter symbols during a spin. This will, in turn, reward you with a total of 10 freespins and an additional Wild symbol.

The second, extra Wild comes in the form of a wooden shield with its own little feature. Every time it appears on the reels, it will guarantee you a multiplier of either 2x or 3x for the next 3 freespins. And what’s more, you will also be able to retrigger the feature to gain an additional 5 freespins. To do so, you will need land the Scatter symbol on reels 1 and 2 simultaneously.

Diamond Chief boasts and impressive design with high quality graphics. It also boasts a high volatility, as is custom with Ainsworth slot games, which should imply that caution may come in handy. Of course, the biggest wins are hiding in the bonus round, but it may take a while to reach it.