Rumble Rumble isn’t quite the most sophisticated of slot games that we’ve seen by developer Ainsworth Game Technology. The visuals aren’t of the highest quality and, frankly, there’s not all that much to look at. The backdrop depicts three angry bulls, looking like they are ready to charge. Blazing flames of fire are at their feet, further heating up the atmosphere. As for the symbols, they traditionally feature the lower value playing card symbols: A, K, Q, J, 10 and 9. Aside from them, the reels depict several different animals, such as elks, horses, wolves and eagles. And just as we have grown accustomed to with games by this developer, there is no actual music to accompany you spinning the reels. However, there is a generic soundtrack that will mark winning combos only.

The setup in Rumble Rumble features 5 reels and 3 rows and a maximum number of 100 paylines. You are, however, free to adjust that number and play with a lesser one, if you so choose. The controls are available in the game settings. That is also where you will be able to set your desired wager amount, which can range from £1 per spin to £75 per spin. Players can count on a standard RTP of 94,08%. 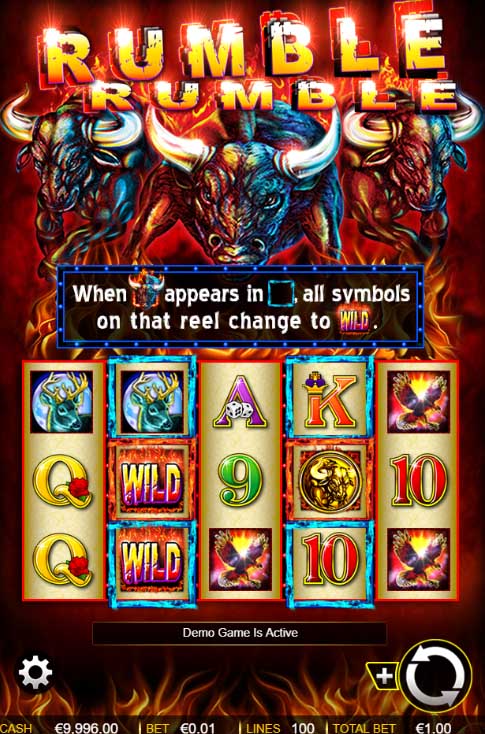 There’s actually an abundance of special features in Rumble Rumble. First of all, there’s a regular Wild symbol, which will be able to replace any of the other symbols to help create winning sequences. But take note of the Fire Bulls symbol, too. If it lands in a blue edged square on reels 2 or 4, it will transform all the positions on that reel into Wilds. But you will really want it to land on a red edged position. That way it will turn a total of 3 whole reels Wild! And if you land it in both red positions simultaneously – the whole screen will turn Wild.

This game also feature a Scatter symbol, which will allow you to trigger the freespins bonus round. Land three or more of it anywhere on the reels, and you will receive 8 freespins. And landing two or more Scatters will let you retrigger the feature and gain more freespins. But keep an eye out for the Fire Bull symbol, because it will be present during the freespins feature, as well. It will allow you to potentially fill the reels with Wilds and, therefore, increase your wins.

What’s more, you will also have the opportunity to retrigger the feature and gain an additional 5 freespins. Doing so will need you to once again land at least 3 Scatter symbols anywhere on the screen during the feature.

Ainsworth slot games usually offer roughly the same type of gameplay. Things are a bit different here, not only because of the setup, but also mainly thanks to the unusual blue and red squares on the reels. They may seem a bit complex, but they can be very rewarding.