Crystal Cash is a high variance wealth-themed slot game by software provider Ainsworth Game Technology. It’s similar to a number of other games by this developer in terms of its setup and volatility. In addition, it also shares the unusual, yet typical for Ainsworth number of paylines – 100. The graphics in this slot game are of pretty high quality and include the same lower value card symbols as we’ve seen in a number of other Ainsworth games. Aside from them, the icons all picture various symbols of luxury and wealth. Such are, for example, the gold watches, expensive women’s shoes, high-end perfumes, etc. And, appropriately, the backdrop depicts a mound of purplish crystals or precious stones. There’s also no soundtrack here, which may be especially appealing to some. 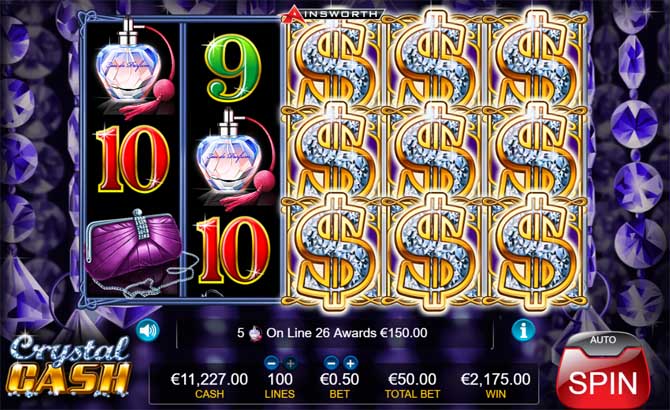 The layout in Crystal Cash is pretty standard, featuring the regular 5 reels and 3 rows. As we already pointed out, there’s larger than usual number of paylines here – the maximum is 100. You are, however, free to regulate their number. But if you choose to play with the maximum number, you will find that stakes can be rather expensive. The betting range starts at £1 per spin and reaches up to £75 per spin. And with an RTP of only 94,06%, things can be quite tricky here.

The diamond encrusted dollar sign is the Wild symbol on these reels. As such, it has the capacity of replacing any of the regular symbols to help create winning combos. But it cannot substitute for the slot’s Scatter symbol and can appear only on the rightmost reels 3, 4 and 5.

As for the Scatter, it comes in the form of a heart shaped blue diamond and can appear in any position on the reels. Aside from being a very lucrative symbol, it can also trigger the single bonus feature that this game has in store. To do so, you will need to land at least 3 Scatter symbols during a spin. As a result, you will receive a total of 10 freespins. During the freespins bonus feature, the reels, on which you can see the Wild symbol, will shift to left. Meaning, it will only be able to appear on the middle three reels: 2, 3 and 4.

What’s more, if during the freespins you land a winning combo with the Wild symbol, the payouts will be subject to a 2x or 3x multiplier. And to make matters even better, the lower value playing card symbols will not be present during the freespins. This will automatically increase your wins. Then, last but not least, you can also add an extra 5 freespins to your total freespins count, by landing another 3 or more Scatters during the feature.

Crystal Cash is a fairly simple and straightforward slot game. It lacks any extreme flashiness, despite the theme, and anything that could possibly distract you from gameplay. And this is, in fact, a good thing, due to the game’s very high variance.