King Chameleon is an incredibly flamboyant and visually rewarding slot game created by Ainsworth. It will provide players with superb graphics and a very pleasant abundance of colors. And how couldn’t it? Wouldn’t the title suggest as much? Speaking of the title, the Chameleon symbol is the most bright and brilliant icon. The background is also all about all the colors of the rainbow, but aside from that you’ll see identical totem poles on either side of the reel. The theme here is an unusual one and mainly focuses on Madagascar wildlife, coupled with the traditional lower value playing card symbols. Some of the animals you will see include the massive big-headed turtles, lemurs, lovely butterflies and dangerously colored frogs. 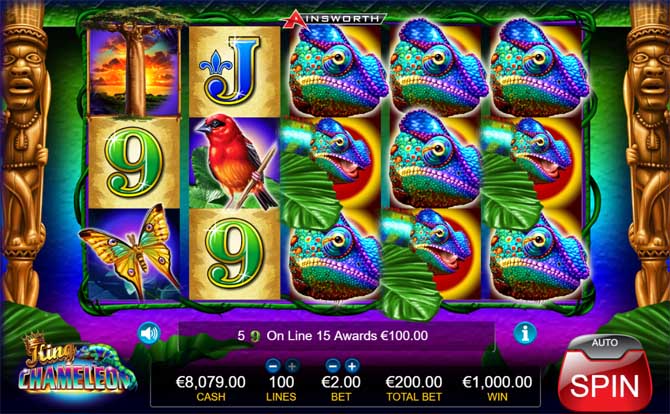 The setup and layout of King Chameleon are pretty much the same as in other slot games by this developer. They feature 5 reels and 3 rows, as well as a total of 100 paylines. Naturally, that many paylines come with a price and stakes here start at the pretty high £1 per spin. The maximum amount you will be able to bet is £75 per spin. But you will also be able to pay with a lesser number of paylines, which you can regulate on the main screen. The RTP is also around its traditional mark of 94.18%.

The base game will provide you with a total of two special symbols. The first of them is the Wild symbol, which is the shape of the chameleon. You will only be able to see it on the right-most reels 3, 4 and 5, but it can replace any of the other symbols, not counting the Scatter, to help create winning sequences. And speaking of those, when they occur and include the Wild, it will come to life and catch a butterfly.

As for the Scatter, it depicts an enormous baobab tree and can appear in any position on the reels. Furthermore, the Scatter symbol is also responsible for triggering the single freespins bonus round. You will be looking to land at least 3 Scatter symbols, in order to trigger the feature. As a result, you will receive a total of 8 freespins and a new, additional special symbol. An extra Wild will be added to the middle reel 3 in the form of a Gold Chameleon. In addition to replacing other symbols, it will also land in place when it lands on the reels.

Moreover, the second Wild symbol will also offer you a multiplier that will increase by one after each spin. Once it reaches 5x, the multiplier will remain at that value. And to make things even better, you will also have the opportunity to gain an extra 5 freespins. Note that the Scatter will only appear on reels 1 and 2 during the freespins feature, and you will need to land both to retrigger it.

King Chameleon is a dynamic slot game with a high variance. But aside from the possibility of winning big, you will also get to enjoy some pretty cool visuals.