Ainsworth Game Technology is a developer that appears to have an affinity for jungle themed slot games. But are you ready for a more comedic spin on this theme? Jungle Monkeys is prepared to offer you just that. The backdrop here takes us to the massive branches, somewhere high up in the jungle trees. It has a distinct cartoonish feel, as do some of the symbols on the reels. But even despite that, the graphics are still great and up to the Ainsworth standard. There will be a few animated features to keep things fun during winning spins, so watch out for those. As for the icons, they traditionally feature the lower value playing card symbols, alongside tropical fruit, palm trees, barrels and a parrot. 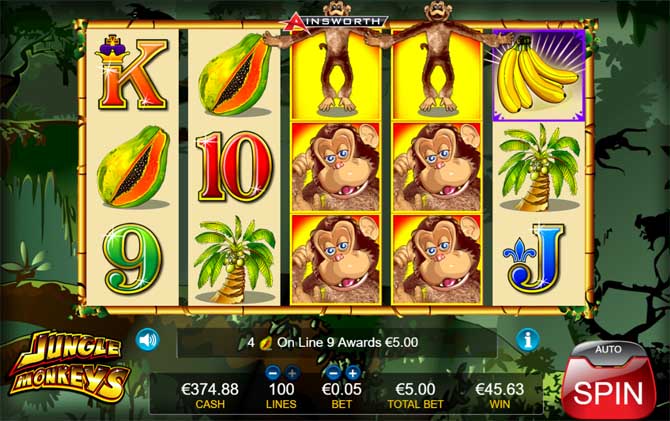 The setup in Jungle Monkeys is fairly common, featuring 5 reels and 3 rows. The maximum number of paylines available is 100, but you may use the controls to play with less. This also impacts the stake amounts, as you will notice they are quite high. The maximum number of paylines will make for a betting range of between £1 per spin and £75 per spin. Most Ainsworth games tend to have roughly the same RTP of about 94,14%, and this slot makes no exception.

The Monkey symbol in this slot game is the Wild. As is often the case in slot games by this developer, you will find that the Wild can only appear on reels 3, 4 and 5. But that won’t stop it from completing its Wild duties and replace any of the other symbols to help create winning combos. However, there is one symbol that it will not be able to substitute for and this is, of course, the Scatter.

The Scatter pictures a barrel and, unlike the Wild symbol, it can appear in any position on the reels. Furthermore, it can offer you payouts of up to 100 times your total stake. And in addition to that it will also provide you with the opportunity to trigger the freespins bonus feature. In order to do so, you will need to land at least three Scatter symbols in any position on the reels. You can receive 8, 12 or 20 freespins for 3, 4 or 5 Scatter symbols.

During this feature the Wild will only appear on reels 1, 3 and 5. What’s more, you will also be able to retrigger this feature, by landing another three or more Scatters. As a result, you will receive an additional 5 freespins on top of those you already have.

Jungle Monkeys is a pretty volatile slot game, though not as volatile as most other slot games by Ainsworth Game Technology. Nevertheless, you might still need to be careful with this slot, especially provided the expensive wagers. The graphics are very decent, however, besides them and the somewhat rarely occurring bonus feature, there’s really not all that much in store for players here.