Jurassic World is an online slot game by slot game developer Microgaming. And of course, who else would be fit to turn the latest sequel of a cult movie into a slot game? Now, whether or not you have actually seen Jurassic World or not, you are still bound to be roughly aware of what it’s about. In addition, who wouldn’t appreciate some giant, prehistoric carnivorous and deadly reptiles running around aside us humans anyway? But back to the slot game, one thing we should point out here is certainly the graphics quality. The visuals here are nothing short of outstanding and the symbols here – characters and dinos alike – are taken directly from the film. You can see the enormous structures of the new and improved dinosaur park in the backdrop, along with the beautiful nature surrounding it. 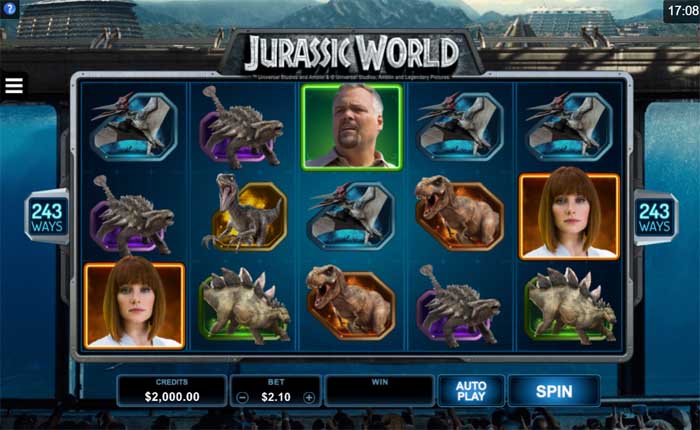 Yet despite all the sophistication around the reels, the genuine attraction is actually on them – the symbols. And they start off with the lower value dinosaur icons. First are the somewhat less intimidating Ankylosaurus, Pteranodon and the grass eating Stegosaurus. And then that brings us to the scarier and notorious from the first film Velociraptor. Following it is the slightly higher paying T-rex – also a classic predator of those times. And finally we have the new dinosaur introduced by Jurassic World – the Indominus Rex. This then takes us to the higher value symbols – the characters from the movie. They are Vic Hoskins, Simon Masrani, Claire Dearing and Chris Pratt’s character – Owen Brady. Owen is also the highest paying of these symbols. As for the layout in this slot game, things are pretty standard with 5 reels and 3 rows. There are 243 ways to win here, so you won’t have the ability to adjust paylines or anything like that. Then again, stakes here are fairly reasonable and start at the minimum of 30p per single spin. And the maximum amount you will be able to wager on these reels is £7.20 per spin. In addition, the RTP here is quite impressive at 97.00%.

The Jurassic World logo symbol acts as the game’s Wild and can appear in any position on the reels. It’s also fairly lucrative, in fact, more so than any of the regular symbols. But more importantly, it will be able to substitute for any of the other symbols on these reels to help create winning combinations. The only icon that the Wild will not be able to replace is the game’s Scatter symbol. There’s also another thing about the Wild that you should know – it can appear in stacks. Moreover, it can even appear in stacks of up to 10 symbols! 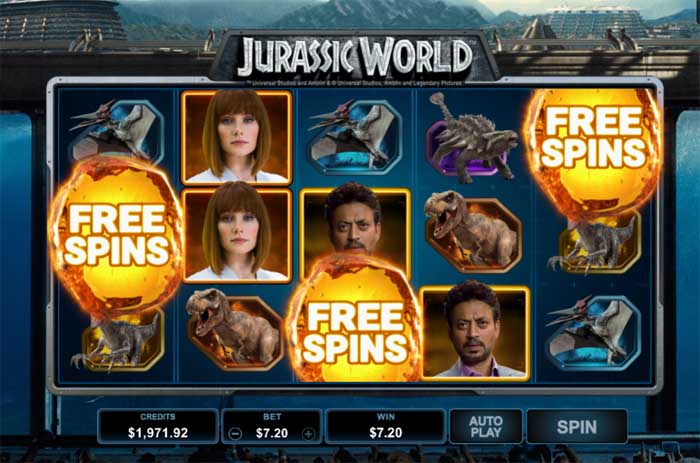 Moving on to the Scatter, though, it comes in the form of the famous mosquito encased in amber – where the whole thing began. It, too, can appear in any position, anywhere on the screen. But if it’s only 2 of these symbols that land during a spin, they will turn into Wilds. And they will act accordingly. However, if it’s more than that – then you’re in for a treat. Not to mention that this is ultimately the highest paying symbol on these reels. More importantly, though, landing 3 or more Scatters will trigger the game’s freespins bonus round. And you can in fact enter one of the three available freespins modes. At first these will be chosen randomly, but after you trigger the feature for the 15th time, you will then have the opportunity to choose for yourself. 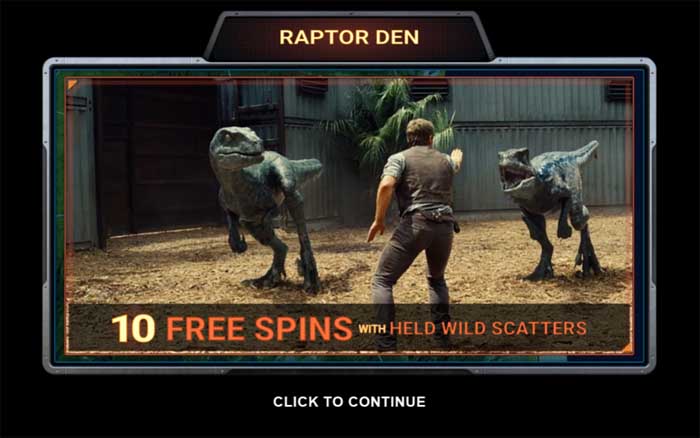 The first available mode is Gyrosphere Valley. It will award you 10 freespins with a multiplier trail. The point is that the multiplier will increase with each non-winning spin. On the other hand, winning spin will reset it. And what’s more, the freespins will only be able to end on a winning spin. Then there’s the second mode, which will also award you a total of 10 freespins – the Creation Lab. It boasts a Rolling Reels feature, which will make symbols forming winning combos disappear, making way for new ones to fall in their place. As a result, you can potentially gain multiple wins during the same spin. There are also the Cryo Wild symbols that can remain frozen in place for 3 wins. And last but not least is the Raptor Den, awarding 10 freespins, just like the other two modes. Scatters here become Wilds and can remain in place for you to gain extra freespins. 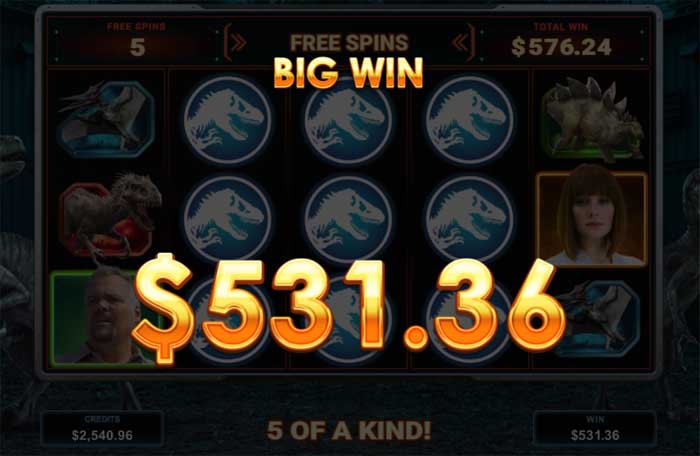 Jurassic World certainly impresses with its high quality visuals and abundance of features. It might, however, seem a little frustrating that you will need to trigger the bonus feature a total of 15 times before you actually get to choose which mode to play in. But all in all, each has its cool benefits, so that will hardly take away from gameplay. In addition, you will also get your go at the freespins fairly often and prizes here are of decent sizes. The slot has an impressive potential, with a max potential payout of 14.000 times your be bet (Gyrosphere Valley feature). With a high RTP of 97.00%, Jurassic World also makes for a very good bet.