The name of King Kong may sound fearsome, but not in this case. King Kong Cash is a rather fun and endearing slot game by software provider Blueprint Gaming. As opposed to introducing us to the giant destructive gorilla character, this developer has taken a completely different approach to the legendary beast. In fact, here you can see him peacefully sleeping on his stone throne, wearing a floral print shirt. You couldn’t possibly see someone wearing a floral print shirt as threatening now, could you? The 3D graphics have a pronounced cartoonish feel about them, which also contributes to the whole silly atmosphere. The backdrop features tall palm trees and a clearing in between them. And that clearing appears to be the remnants of some old civilization, with stone tiles and other structures. Adding to the whole comic appearance are the banana peels that are scattered all over the ground. Apart from them you can also see gold and other riches in the corner of the screen. 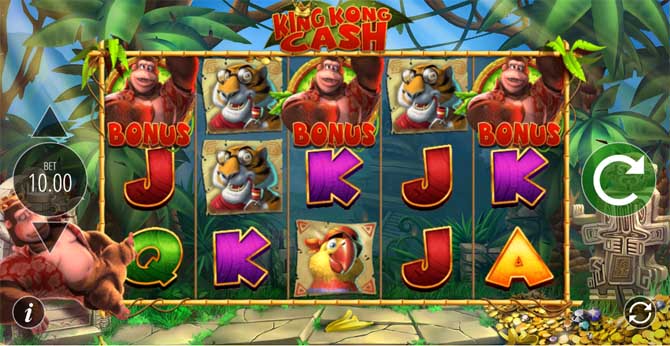 The symbols here include the playfully styled lower value playing card symbols A, K, Q and J. Then we have four animal characters as the medium value symbols. They feature a crocodile, a parrot, a tiger and, last but not least, a rhino. Following them we have one of the two most valuable symbols on the reels – the game logo. It will offer you payout of up to 500 coins for 5 of a kind on a payline. The setup in this slot game features 5 reels and 3 rows – probably the most common layout today. There are 20 fixed paylines here in total and a betting range starting at 20p per spin. The maximum amount you will be able to wager on these reels is £500 per spin. And you can expect an RTP that is set at 95.80%.

King Kong Cash boasts a Wild symbol in the form of a barrel with gold coins around it. The Wild is the second of the two most valuable symbols on these reels, also offering payouts of up to 500 coins. In addition, you can expect to see it in any position on the reels, which will only better contribute towards winning combinations. It can also replace any of the regular symbols to fill in for them in winning sequences. But it cannot replace the Bonus Scatter symbol in this game, which comes in the shape of none other than King Kong himself. 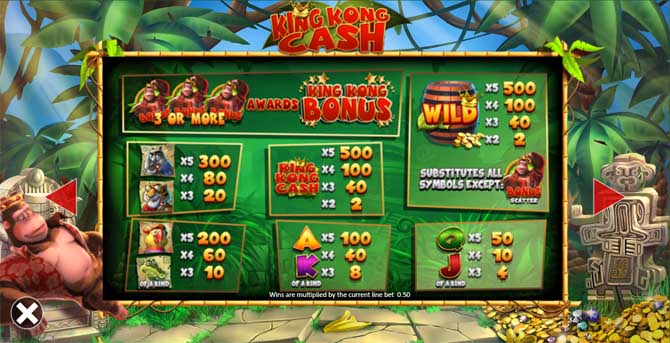 That is precisely the symbol you will want to look out for here, as it will allow you to enter the bonus game. And in order to do so, you will need to land at least 3 Bonus symbols during a spin. It can be anywhere on the reels. As a result, you will then need to spin a wheel that will determine which of the 5 bonus features you will get. For example, you can land the Barrel Blast feature, which is a pick-me game. It will give you the opportunity to pick barrels and win a multiplier. Another option is the King Kong Trail feature, which will offer you a classic cash trail. You will collect cash prizes and potentially even win the Big Money Bonus. 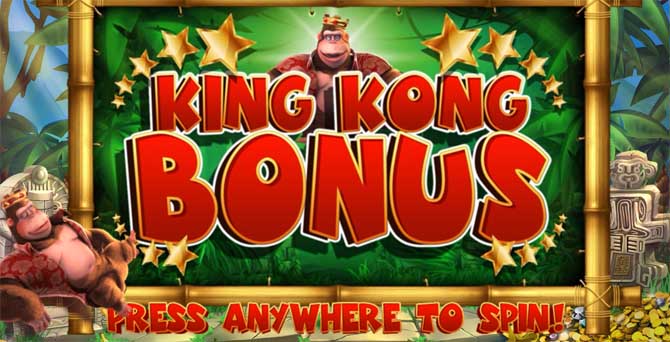 Other alternatives are the two freespins features: the Empire Freespins feature and the Golden Kong Freespins feature. Both features will be played on different sets of reels, where you will need to collect golden monkeys in the first one, and Wilds in the second. After the end of the latter feature, you will then receive super spins with all the Wilds you had collected. And as exciting as these special features sound, you may find it surprising that you can also benefit from 4 random features in this slot! That’s right, at any point in the base game, the sleeping King Kong may just decide to wake up. And when he does, he will trigger one of those random features. For example, he can activate the Bonus Boost feature, by adding more Scatters to the reels. Another option is the King Kong Spin Streak feature, which can occur after any winning spin. This will see a respin happen, while the symbols forming the winning combos remain in place. The remaining two features you can benefit from are the Banana Cannon Wilds and Golden Barrel Super Spin features.

King Kong Cash offers fairly diverse gameplay thanks to the abundance of special features. If bonuses and extra cash prizes is what you’re after – this is certainly the game for you. There aren’t all that many slot games out there that will offer you just as many different bonus games. What doesn’t hurt is that the graphics and design are also very much up to standard, making this a truly entertaining slot.