Paws of Fury is an video slot brought to you by software manufacturer Blueprint Gaming. The slot boasts exquisite 3D graphics and a fun twist on a rather overused Asian theme. The main attraction in terms of the visuals here is the levitating panda right beside the reels, who is for some reason wearing a pot on its head and is holding a pile of rice. In the backdrop you can see the pink blossoms of the cherry trees, swaying the breeze. Occasionally that very same breeze will also blow some of the petals out into the foreground. The reels are actually an interesting structure in themselves. They have a bright gold frame, decorated with Chinese inscriptions. But wait until you see what’s on them and what the peacefully meditating panda can do to them. 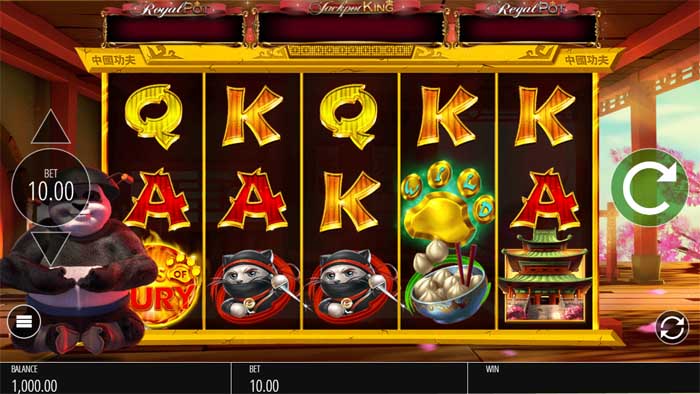 First off, the symbols here include the less valuable icons – each in a bright color. The symbols in question are only four and feature A, K, Q and J. Next, we have the thematic symbols, such as the bowl of Chinese dumplings and the purple Chinese book. Next in line is the ninja cat symbol. Yes, you read correctly. Complete with black outfit, mask and sword. And finally is the flaming with the game’s logo. This is the most lucrative symbol of the regular ones on these reels. With its help you can pocket a total of up to 500 times your total stake. The layout in Paws of Fury is pretty traditional and features the common grid of 5 reels and 3 rows. The slot has 20 fixed paylines available. So you won’t have the opportunity to regulate them. Stakes, on the other hand, are rather flexible. They range from a minimum of 20p per spin to a maximum amount of £500 per single spin. The RTP of Paws of Fury from Blueprint Gaming is 95.16%.

The Golden Paw symbol in this title acts as the Wild. It will be able to replace any of the other icons and thus help create better winning opportunities for you. It can also appear on any of the reels on the screen. This is also one of the two most lucrative icons in Paws of Fury, alongside the logo symbol. So, it can also give you up to 500 times your total stake if you manage to line five up on an active payline. Note, however, that there is one symbol that the Wild cannot substitute for and that’s the game’s Scatter. 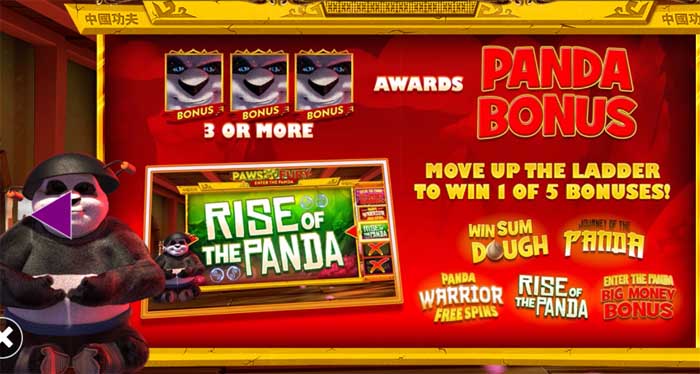 The Scatter symbol depicts the panda and just like the Wild, it can also appear in any position, anywhere on the five reels. However, it doesn’t offer any payouts. Instead, it will be able to activate the Panda Bonus. But to do so, you will need to land at least 3 Scatters symbols all at the same time during a spin. You will then enter a new screen with a ladder. Climb the ladder, and you will see which of the five different bonus features you will get to play.

Two of these features are freespins bonus rounds, the first of which is the Panda Warrior Freespins feature. These will take place on a different set of reels, one with 40 paylines. Throughout this feature, you will be accumulating Wilds symbols, until finally you will get one spin where all of the Wilds you gathered will appear on the screen. And then after that you might also get a respin. The other freespins round is the Rise of the Panda feature. During this one you will be collecting Ying Yang symbols instead. 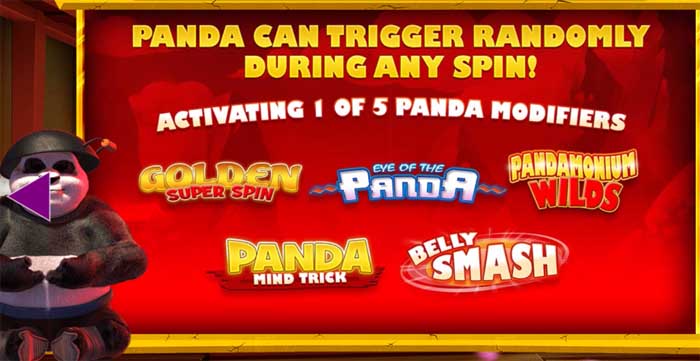 Other bonuses include a cash trail called Journey of the Panda. Another one is the Panda Big Money Bonus feature where you can win cash prizes by collecting orbs. Then there’s also the Win Sum Dough feature, where you can collect barrels to reveal multiplier prizes and cash. In addition to these, Paws of Fury also has 5 random features that can take place at any point during the base game. One is the Pandemonium Wilds feature, which will add extra Wilds to the reels. Sometimes these Wilds will also remain sticky for a respin. Other features will cover whole reels with Wilds, cause Mystery symbols to appear or even add extra Bonus symbols onto the screen.

As you can clearly tell, this title is a bouquet of special features. And besides the entertainment that these will provide, they also offer pretty good winning opportunities. The random features trigger pretty frequently, and the bonus game isn’t rare at all either. We would put this offering in the solid medium variance range. In addition to that, it certainly doesn’t hurt that the visuals are amazing. And another thing that doesn’t hurt is that you can potentially also win one of three progressive jackpots.