If you have ever played any strategy games, where you need to create your own civilization and help it evolve by building structures and growing armies, Kingdom of Wealth may come across as very familiar to you. This Blueprint Gaming slot game provides a somewhat cartoonish feel due to the graphics. But the soundtrack would suggest a more epic and uplifting air. The symbols include the lower value playing card symbols: A, K, Q, J and 10. In addition, you will also witness depictions of a pig, lion and a shield, as well as the game’s logo. There are several special symbols in addition to these, but we’ll discuss them in a little bit.

As far as the setup of the game goes, it features 5 reels and 3 rows. There is a total of 30 paylines, but you will not be able to adjust them. Betting amounts span from the minimum of 50p per spin and up to the maximum of £250 per spin. And as for the RTP, it’s an average 95.9%.

Special Features in Kingdom of Wealth

Kingdom of Wealth actually comes packed with a number of entertaining special features. First, we should mention that it has a Wild symbol that can substitute for any of the regular symbols on the reels and thus help create winning combinations. However, it cannot replace any of the special symbols, including the Monk, Queen and Barbarian bonus symbols. 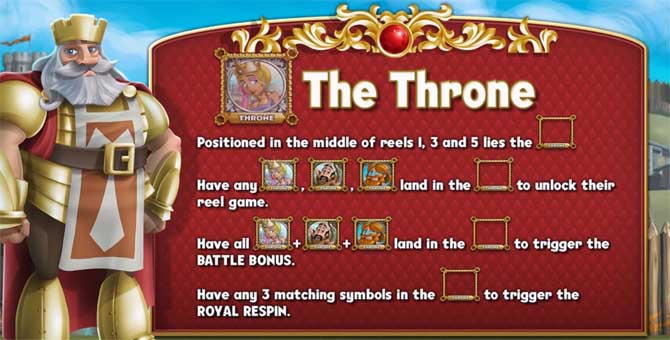 Initially, you will start off playing as a serf, but as you progress, you will be able to reach other levels in the game. They include the Commoner, Knight, Baron, Duke, Merchant, Sheriff, Viceroy, King Regent and King levels. In order to move across levels, you will need to complete certain tasks, such as gain 5 consecutive winning spins, etc.

You will notice reels 1, 3 and 5 each have a throne space. Whenever a special character symbols lands in them, this will activate different features. Such is, for example, the Queen on reel 1, which will make hearts randomly appear on the screen. They will then transform to become matching symbols. Moving on, the Monk on the middle reel will add expanding Wilds to the reels. Finally, the Barbarian that appears on reel 5 will add Colossal Wilds to the reels. 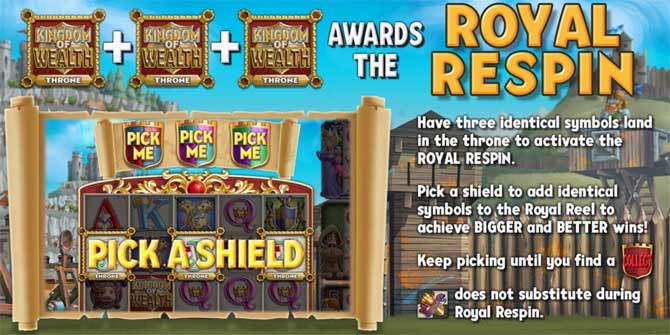 If you land all three different character symbols in the throne spaces, this will trigger the Battle Bonus. You will need to pick shields, which will reveal multipliers for your current win or respins of the separate characters’ reels. Last but not least, you can trigger the Royal Respin feature by landing any three matching symbols in the throne spaces.

Kingdom of Wealth is a nice slot game with an abundance of special features that will surely entertain anyone after bonuses. True, some of them might prove a little tricky to activate, but there are some fantastic payouts in store here.