Puppy Payday is yet another cartoonish slot game by software provider 1X2Gaming. In the event that you have played other similar slot games by this developer, the graphics here are sure to be very familiar to you. They don’t have any elaborate animated sequences, nor do they shine with exceptional high definition quality. In fact, they’re really quite basic and look like they’ve come out of a children’s book. Some of the icons on the reels picture cute puppies, while others are downright creepy. There are 8 different puppy dog symbols on the reels in total, each representing a different breed. We were able to distinguish a husky and a Coton de Tulear, among others. In addition, this game features a bone and doghouse icons. 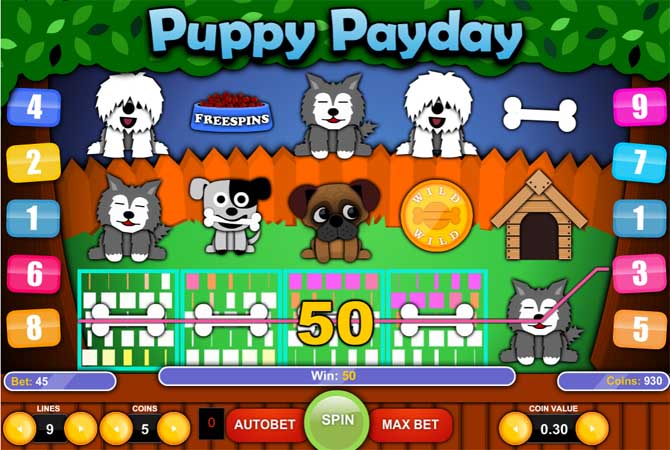 As far as the layout of Puppy Payday goes, there are 5 reels and 3 rows – just the regular grid view. Note that you may play with up to 9 paylines, or less if you so choose. Players will also have equal flexibility where the coin amount and coin value are concerned. All in all, this will make for a fairly comfortable betting range of 9p per spin up to £22.50 per spin. The RTP here is also surprisingly high at around 97.23%.

The Wild symbol in Puppy Payday comes in the shape of a gold medallion with a bone on it. It can appear in any position on the reels and will be able to replace any of the regular symbols to help create winning combos. And that’s not all. In addition to that, the Wild will also be able to double your payouts, even if they’re not part of the winning sequence! However, the single symbol that it will not be able to substitute for is the Scatter.

The Scatter symbol pictures a food bowl, with a mound of dog food in it that says freespins on it. As you can guess, it will be responsible for trigger the freespins bonus feature. And in order to do that, you will need to land 3 or more Scatters anywhere on the reels during a spin. This will result in a minimum of 5 freespins. But if you can land more Scatter symbols, that will give you more freespins.

Thus, 4 Scatters will reward you with a total of 15 freespins. And if you land 5 Scatter symbols, they will give you the maximum of 25 freespins. Couple that with the 2x multiplier of the Wild, and you can really make those freespins count. However, you will not be able to retrigger the feature. Therefore, it would be best to aim for the highest amount.

Puppy Payday is very similar to other slot games by this developer in the cartoonish feel of the graphics, as well as the relatively simplistic gameplay. This may appeal to some players and may be off-putting to others. The single bonus feature may not offer all that much entertainment, but with an RTP like the one here, it may still be worth your while.