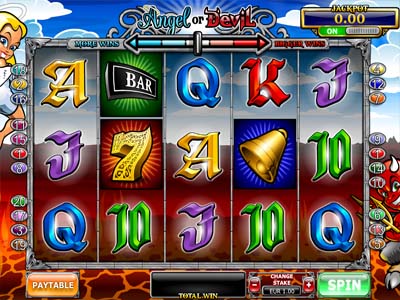 “Are you an Angel or Devil?”, this game asks in the first instance. It then provides players with a set of reels which are set against a back drop of blue skies and clouds at the top, with a blonde-haired angel to the left hand side of the reels, and at the bottom, there’s the devil peering up from his hot and hellish underworld. Alongside this, you’ll find icons appearing on the reels which don’t particularly have much to do with heaven or hell. Instead, they take on the form of classic slot game symbols. In that case, you’ll spin your way through symbols of bells, BARs and 7s, and all of these symbols are accompanied by the A, J, K, Q and 10 icons, which tend to appear as normal in a video slot.

The game is set out on a five reel and three row layout, while Ash Gaming has also included a total of 20 separate pay lines alongside. The lines are fixed in place, and therefore unable to be customised. However, the stake you place per spin is able to be changed, ranging from its minimum of £0.20 and rising up to a maximum of £200. This presents you with the maximum overall wager that you’re able to place per spin.

The previously mentioned setting of the game is able to be customised as a special feature to suit your own preferences. Therefore, you can use a slider at the top of the reels to create an entirely heavenly setting, or a completely hellish experience.

There are two wild icons which will appear on the reels, and these are represented by the angel and the devil. These will stand in for any other icon in order to form a win, except for scatters. And speaking of scatters, these are represented by the game’s logo. Should three of these appear across reels two, three and four, you’ll be awarded an initial total of five freespins. After each of these spins, you need to pick a card to reveal one of four exciting bonuses.

The four bonuses you’re able to receive from the freespins offer the possibility of powering up the round. There’s the ‘Win Multiplier’, which of course, multiplies any reel win. There’s the ‘Cash Prize’, which will award a random pay out. ‘Extra Wilds’ add extra wilds to the reels. And ‘Lock Spins’ sees that the freespins you have will not count down until the padlock opens.

You’ll also notice a progressive jackpot is included in the game, and if a random lightning strike hits the reels and reveals three gold coins, you’ll win the displayed amount!

This is another wonderfully cram-packed game from Ash, offering up many hours of entertaining game play.