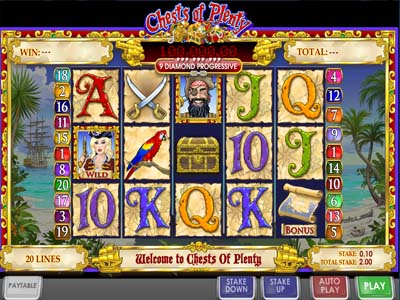 It’s easy enough to figure out that a game entitled as the way this one is, is going to be based on the ever popular pirate theme. Yes, it’s been done by just about every games developer out there, but Ash Gaming do bring a certain sort of unique style to it with this one. It’s done thoroughly well, presenting you with reels which are filled with the obvious imagery for its symbols – treasure chests, parrots, cutlasses, treasure maps, and of course, two characters, those being a male and female pirate. There’s the sound of a boat sailing the high seas heard in the background, and atop the reels, you’ll be able to see a progressive jackpot as well.

The game itself is played on a five reel and three row layout, and this has been imbued with 20 separate pay lines alongside. The lines are fixed in place, so cannot be customised. However, all players have the option of switching their wager amount around every spin. This is done by altering the stake up or down with the relevant buttons. The bet level ranges from its minimum of £0.01 per pay line to £5 per pay line. Therefore, a maximum overall wager of £100 per spin can be played.

The female pirate in this game is its wild symbol, and this will substitute for all icons on the reels to make a win. The exceptions to this rule are the scatter and bonus icons. Should this icon appear next to the male pirate on left or right, it will transform it into a wild as well.

The treasure map is the bonus icon in the game, and if you spin three, four or five of these, you’ll trigger the ‘Treasure Island’ bonus round. If you spin three, you’ll begin the round on Booty Island. Four will take you straight to Isle of Plenty. And five icons will begin the round on Jackpot Island for you. You can advance through the islands in that order as well by collecting maps. Here, you’ll need to explore the islands for treasure. This is done by spinning the wheel to move around the island.

Finally, the treasure chest is the game’s scatter symbol. Should you spin three of these, you’ll trigger the ‘Treasure Chest Scatter’ game. Each of the chests will zoom out and draw three gems from inside. Three of the same colour gems will award one of three different payments. Chests will continue drawing gems until no further wins can be formed. If all three chests draw out three diamonds on the same draw, you will win the progressive jackpot amount shown!

Chests of Plenty provides a very nice take on the pirate theme, and it’s filled with special features to make it ever more riveting for you to play.