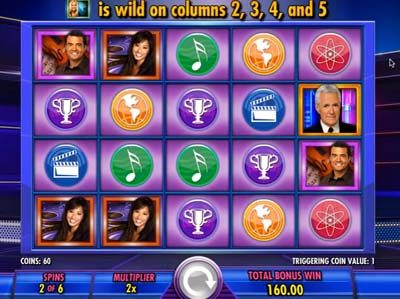 If you’re an American, you’ll be fully aware of the television game show called Jeopardy. The series goes way back to 1964 and was originally hosted by Art Fleming, and later on by Alex Trebek, who still provides the show with his presenter duties now. The reels of this game from IGT feature icons of Trebek as the host, as well as the prize presenters in their various male and female forms.

You’ll play the game on a five reel and four row layout, while a total of 40 separate pay lines are also included. These are not able to be customised, so if you wish to alter around your wagering amount, you must do so by changing you coin value up or down. This begins from its minimum level of £0,1 per line, and increases up to £1, which will therefore allow all gamers to place a maximum overall wager of £60 per spin.

The game has a feature included in it called ‘Wild Rush’, and this will add more wild symbols to the reels both in the freespins bonus feature and in the base game. When a wild ‘Jeopardy!’ symbol lands on a reel, the chance of getting a wild symbol below it increases. These can spread down an entire column in fact.

As a wild icon, this can substitute for any other symbol on the reels, except for the bonus icon. Wilds can appear in columns two, three, four and five only.

This game brings all the wonders of the television show right to your computer screen, offering up a wonderfully challenging game at times, with compelling special features alongside.