Jungle Jackpots is a slot game by software developer Blueprint Gaming, which is loosely based on the characters of the Jungle Book. In fact, you will notice that the game itself comes in the form of an open book. You will notice all the most memorable characters, including, of course Mowgli, Baloo, Bagheera and Kaa. Mowgli will swing across the screen, bringing all the symbols on the reels to life as the game begins. They start with the lower value playing card symbols A, K, Q, J and 10. Following them are a couple of torches, a little house and a basket of tropical fruit. You will be spinning the reels with the accompaniment of different jungle sounds, such as bird singing.

There are 5 reels in the book and 3 rows, with a total amount of 20 paylines. You will not be able to deactivate any of the paylines, though. Stakes can range from a comfortably low 20p per spin and up to £500 per spin. As for the RTP, you can count on an average of about 95.63%.

Jungle Jackpots is rich with different special features, each of which has to do with one of the different characters. But first, let’s get the Wild out of the way. It comes in the shape of a paw print and is also the most lucrative symbol on the reels. Furthermore, it can replace any of the regular symbols to contribute to winning sequences. However, it cannot replace the Bonus symbol. 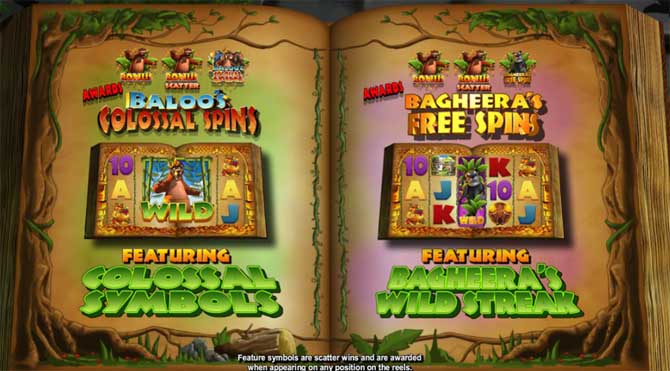 The Bonus symbol, in turn, pictures Baloo the bear and will be responsible for triggering one of the four available bonus features. He can appear on reels 1 and 3, which is exactly where you will need to land him. In addition, the bonus symbol that appears on reel 5 will determine the exact bonus feature that you will trigger. For example, you can activate the Colossal Spins bonus feature, which will provide colossal symbols on the reels. Alternatively, you can trigger Bagheera’s freespins, featuring Bagheera’s Wild streak and 5 freespins. 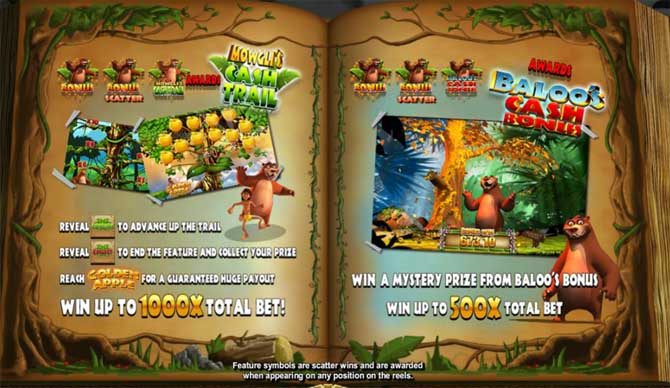 In addition, you can also benefit from Baloo’s Cash bonus feature, which can award you up to 500x your bet. Last but not least is Mowgli’s Cash Trail, which can provide amazing cash prizes of up to 1000x you total bet. But this game also has a very entertaining random feature that can occur at any point during gameplay. It’s called Mowgli’s Wild Adventure and will provide you with one of 5 different features. You can benefit from Locked Wilds, Expanding Wilds, Mischief Wilds and more. 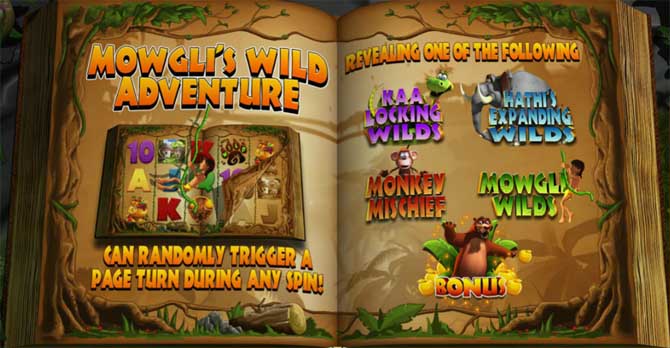 Jungle Jackpots is a bundle of fun, offering a real thrill, as you never know what the next spin might bring. The abundance of bonus features, the creative setup and design all contribute to a terrific gaming experience. It is no wonder that this slot machine is as popular as it is amongst slot players. If you haven’t tried it yet, we highly recommend that you do. The amount of different bonus features and stuff going on will make sure that you will have a bunch of fun playing Jungle Jackpots.