Winstar is a space themed slot game by manufacturer Blueprint Gaming. The backdrop showcases a bright depiction of outer space. You will even notice it’s animated, with stars and stardust travelling across the screen. The design is pretty simple and doesn’t involve any complex graphics or over the top visuals. The same is true for the soundtrack, which is pretty basic and is only audible when you spin the reels. As for the reels themselves, they picture the regular lower value card symbols A, K, Q, J and 10. Following them are different colored stars: green, blue and red. Finally, there’s the highest paying symbol on the reels, which is an extra spikey white star. It can offer payouts of up to a staggering 500 times your bet.

Just like the design, the layout and setup here are also pretty simplistic. They feature 5 reels and 3 rows with a total of 10 paylines. Stake amounts span from 20p per spin up to a maximum of £500 per spin. As far as RTP goes, the average here is a fairly decent 96.44%.

This is another one of Blueprint Gaming’s slot games that don’t focus on special features, but offer other benefits that most other slots don’t have. If you are familiar with the concept, then you know that simplicity is in fact the main focus of this type of slots. Players, who are into old school slot machines, will especially find this enjoyable. That said, there are no Wild symbols or Scatter symbols per se. 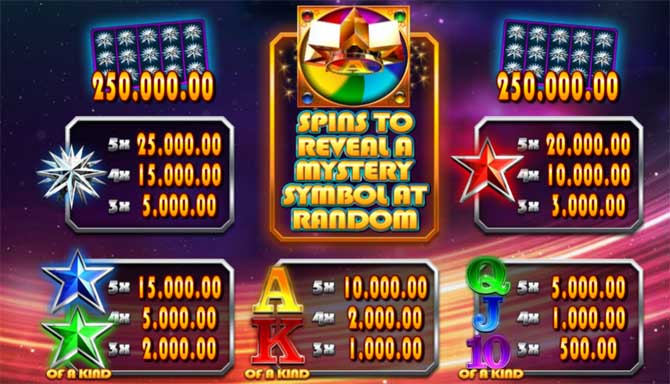 So, one other thing that sets Winstar apart from the majority of other games out there is the fact that winning sequences don’t necessarily need to begin with the first reel. This means that you can easily spin winning combos that start from reel 1, 2 or 3. This makes winning fundamentally easier. The Golden Winstar symbol is the only special symbol of sorts. Every time it lands on the reels, it will appear stacked.

But more importantly, when it does appear, it will turn into matching symbols. That way it not only increases you chances for landing winning combinations, it increases your chances for more lucrative winning combinations. Furthermore, this game also has a Progressive Jackpot that you can take a swing at. The only thing is that this is a random feature. You will want to look out for the moment when all the reels turn gold. That is when you will have hit the jackpot.

Winstar shares the same concept as a few other slot games by this provider. As we already pointed out, the focus is on simple graphics and simple gameplay. There are no Wilds or Scatters to center your attention on, but more flexible winning combinations offer decent enough compensation for that. It’s not a game for everyone, but it may be worth giving a try, even you’re usually only after bonuses.