Luchadora is an online slot game by software developer Thunderkick. Its theme centers on Lucha libre – Mexican professional wrestling. Thunderkick are pretty well known for their ability to produce unusual slot games, with high quality visuals and unique gameplay. As for this slot in particular, we have mixed feelings. The backdrop, oddly enough, is actually more interesting to look at. It pictures the wooden floorboards, dyed in different colors by the bright spotlights. And all over the floor you can see posters lying around with the different wrestlers on them. You will also be able to see each and every one of them on the reels. And speaking of that, the symbols on the reels have the same hand-drawn quality to them as the posters you say lying around in the backdrop. We did enjoy the guitar soundtrack, though, it really helped set the right mood and was actually a fairly pleasant tune. 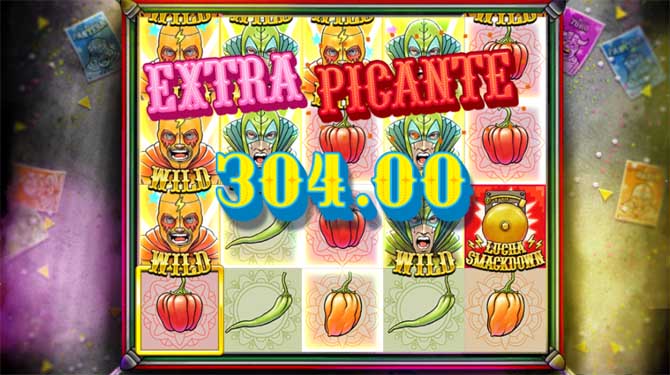 Now as for the symbols, they include the four lower value icons each depicting a different sort of hot pepper. There’s green, yellow, orange and red. We won’t vouch for the exact types here, though. Then there are the four character symbols – the wrestlers: El Toro, El Rayo, El Serpiente and El Pantera. El Toro is the most lucrative of this lot. As for the layout, you will notice it is a bit unusual and at first looks like a square. It features 5 reels and 4 rows, with a total of 30 paylines. You won’t really have the freedom to adjust the number of paylines, though, so you will have to make do with the maximum. However, the betting range is very moderate and starts at only 10p per single spin. The limit to the amount you will be able to wager on these reels is £100 per spin. As for the RTP, things are pretty reasonable in this department, as well – 96.2%.

There’s actually plenty of going on in this online slot game in terms of its features. First of all, it’s important to note that each of the Wrestler symbols can potentially transform to become a Wild. When they do so, they will be able to replace any of the other symbols to help create winning combos. Furthermore, they will also increase in value offering up to 250 times your stake! And in order for them to transform, you will need to land a Wrestler symbol in one of the four corners on the reels. Each of them has a golden frame, so it will be easier for you to spot. Once a Wrestler lands in one of those corners, all the other symbols of the same type will become Wilds and that gold frame will disappear. This feature will last for one spin, after which the Wilds will turn back to regular Wrestler symbols. 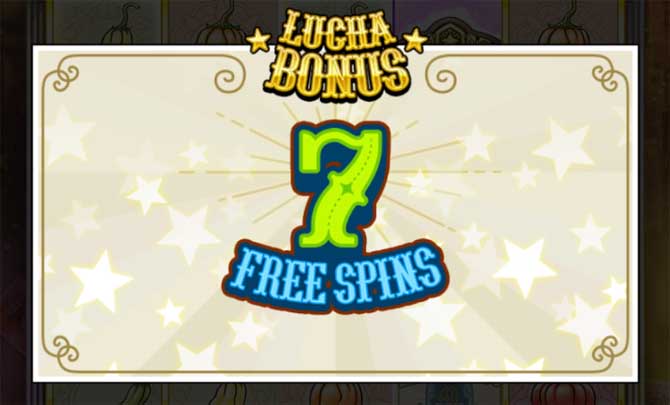 These Wilds will be able to replace any of the symbols, except for the Lucha Bonus and Lucha Smackdwon symbols. The Lucha Bonus symbol will be able to appear on any position on the reels, but you will need at least three of these, in order to trigger the freespins round. As a result, you can receive 7, 11 or 15 freespins – depending on the exact number of Bonus symbols you landed. And if you manage to transform a certain Wrestler symbol or several into Wilds, this will last for the rest of the feature, and not just for one spin. Furthermore, if you manage to turn all Wrestlers into Wild, you will then see the Underdog symbol turn into the La Luchadora symbol, which is equally lucrative. 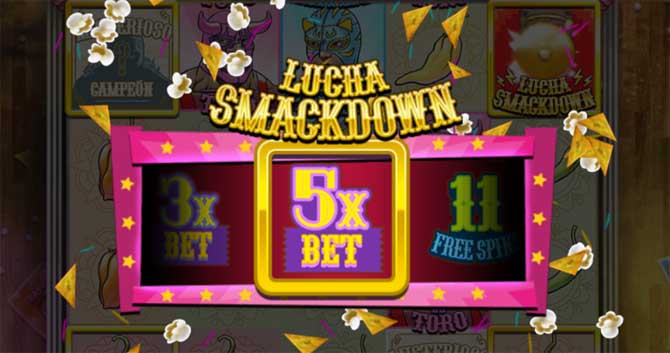 And last but not least, there’s the Lucha Smackdown symbol, which can only land on the fifth reel. Keep an eye on it, because if it happens to land during the base game, it can trigger the freespins feature. It will award you a random number of freespins: 7, 11 or 15. Alternatively, it can offer you a stake multiplier of anything between 2x and 15x. The same can also happen during the freespins feature. You can count on either a multiplier of up to 15 times your total stake. Or you can expect to gain additional freespins. The number of extra freespins can be as low as only 2 or as many as 7 additional freespins. What’s more, you can also land the Lucha Smackdown symbol multiple times during the feature, which can make for even more freespins. Either way, this symbol can prove to be very lucrative for you.

Luchadora is without a doubt a very exciting slot game. True, the graphics of the symbols aren’t quite the most entertaining. But the abundance of special features will constantly keep you on edge and potentially provide amazing wins. This is a high variance title that can offer wins of up to 1995 times your stake.