Golden Lotus is yet another Asian themed online slot game by online slots manufacturer Red Tiger Gaming. Though slots in this genre are pretty much a dime a dozen, this developer still manages to make them pretty attractive, at least visually. This particular game has a very airy and light feel to it. There are none of the typically heavy contrasting colors. Instead, you have the starry sky above and the large petals of the golden lotus below. found their design to also be quite easy on the eye. The lower value card icons are present here and include A, K, Q, J and 10. Following them is a green leaf of a water lily and two koi fish. Then last but not least is a Chinese temple. 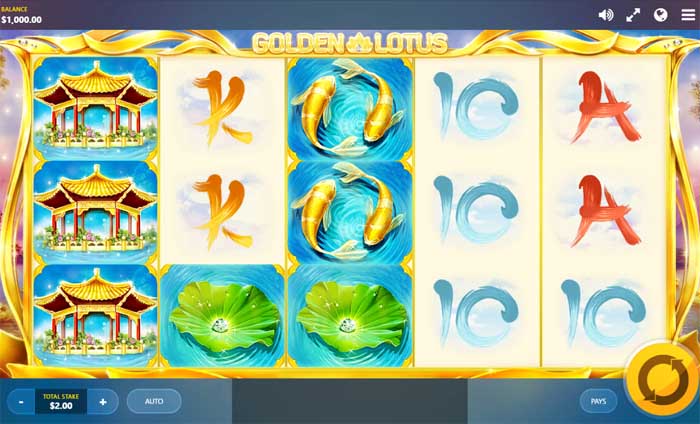 The layout here features 5 reels and 3 rows, just as most online slots do these days. And as is most commonly the case with this developer, there are 20 fixed paylines here. So you won’t be able to adjust their number. You will, however, have more flexibility with the wager amount. You can bet anything from 20p per round up to a maximum of £500 per spin. And the average RTP here is at the agreeable 96.1%.

The Golden Lotus symbol is the game’s Wild and also the most lucrative symbol on these reels. With its help you can pocket up to 800 coins. But more importantly, the Wild can substitute for the other symbols in the game to help create winning combos. However, it cannot replace the game’s Scatter. Another very remarkable features about the Wild symbol in this slot game is the fact that it can lock in place for a given number of spins during the base game. In fact, it can remain locked for up to 10 spins, increasing your winning opportunities. 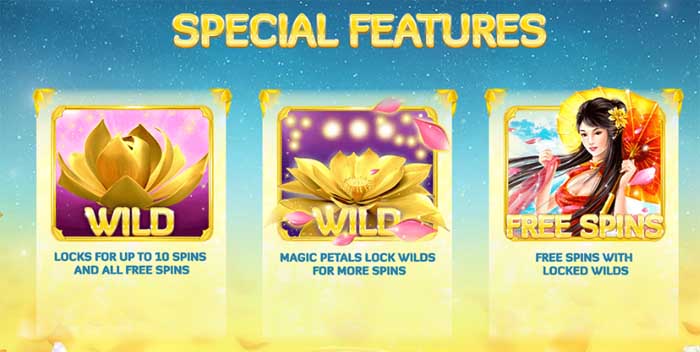 And the Scatter comes in the form of the young woman with a paper umbrella. You will really want to look out for her, because she can trigger the feespins bonus feature. And in order for that to happen you will need to hit at least 3 of these during the same spin. You will then receive a number of random freespins. But furthermore, you can count on the Locked Wilds features throughout the duration of the whole freespins round.

However, as rewarding as this freespins bonus feature can be, it is equally difficult to activate. Be ready for long spells of being oh-so-close to triggering the feature and then not triggering it after all. But we think the Locked Wilds features nicely makes up for it, as you can land them pretty often.

Golden Lotus lands somewhere in the medium to high variance range, which means that there are pretty large winning opportunities here. However, the lack of the typical random features that Red Tiger slots usually boast can make things a little boring at some point.