The basic style of gameplay for a slot is that it’s the player against the house. You’re well aware that the average slots player will lose a small but steady edge to the house over time, and your goal is to see if you’re lucky enough to overcome that slight disadvantage and come out ahead with a jackpot or other type of big win. This is the standard dynamic, but it’s not the only way you have to play these games.

Another approach, and one that has gotten more and more popular as the online casino industry has matured, is the slot tournament. Tournaments and races of this type allow the players to go up against each other instead of just the house, and it creates a much different type of experience that helps many to scratch their competitive itch and get a different type of enjoyment out how these games. 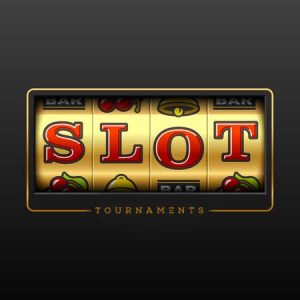 While there are tons of different approaches to how slot tournaments and leaderboard races can be done, there is one basic format that tends to be the most popular in the online environment. The way this works is that players will buy-in by paying a set entry fee, and for that, they are given a certain number of tournament chips. For the sake of example, let’s say you get 1,000 tournament chips. You can wager these chips on the slot the tournament is based around however you want with whatever bet sizes you want within the bounds of what the game has available.

All of your winnings from these spins are tallied in tournament points. Note that these points do not add to your balance of tournament chips, so after you played through your 1,000 chips, for example, that would be the end of your play in the tournament. Your total number of points is your score, and the players with the highest scores in the tournament win prizes based on where they place among the other people in the event.

Another way to have a tournament for online slots is to use the leaderboard race approach. This is typically for events that will last for several weeks at a time, and the basic idea is that you earn points of some type of your real money play on a particular game. For example, you may get one leaderboard point for every real money spin you give that’s worth between $0.25 and $1.50. This cap on the maximum bet size helps to avoid situations with super-uneven bet sizes changing how players are able to earn points.

From there, a leaderboard could be kept that shows the players who have earned the most points during the race event. The players who accumulate the most points will get prizes, but there are often other rewards for players who break certain milestones, regardless of whether other players have beaten them or not. In this way, players get a chance to compete against others, but they also get a chance to compete against themselves to break certain milestones. This helps to create a different type of competitive environment that adds on to the typical online slot experience instead of replacing it completely.

Strategy and slots don’t often go in the same discussion all that much, but when you play them in a tournament or leaderboard environment, you’re adding different elements to the game that aren’t typically there. Your goal becomes to maximize your chances of taking down a reasonable prize, which is often different than how you would normally play. This is anti-intuitive at first, but we’ll give you some examples of how this can work below.

Suppose you’re playing in a typical tournament environment. If you have 1,000 starting chips, you might decide to start off betting 25 chips per spin. However, if you make it through your first 500 starting chips without taking down some reasonable wins, you’ll quickly realize that your chances of placing higher in the rankings have become smaller and smaller.

Continuing to play with small bets won’t really help you that much since a good win at that point isn’t necessarily enough to kick you up in the standings, so it would make more sense to bet for much more like 100 or 250 coins per spin. This goes against typical bankroll management advice, but this is an atypical situation, and it’s a strategic decision that’s based around the fact that it can be your only way of actually winning in the event.

On the other hand, in leaderboard events, you’ll have to find a balance between your bet sizes, the games you’re choosing to play and earning as many points as possible. There are typically several games that you can play to earn points in leaderboard events like this, and you should do a little research to find the one with the highest return to player percentage. From there, you should also use the smallest bet sizes you can to still qualify for tournament points. This combination of intelligent game and wager selection will allow your bankroll to stretch to get you the most points possible in the event to win the most money you can, which is the point of strategy in the first place.

The Pros and Cons of Online Slot Tournaments

The big advantages of playing slot tournaments and leaderboard races online have to do with enjoying a different style of gameplay and of having more strategic options to get ahead of the other players you’re going up against. With that having been said, if you aren’t a fan of this style of play, then it can be a disadvantage instead. Moreover, you’re often limited in game selection in these events to some extent, and that can be a disadvantage as well. Regardless, a ton of players get in on the action with tournaments and leaderboard events on a daily basis, and they are very popular in the industry as a whole.